PM slams parties for not standing by people 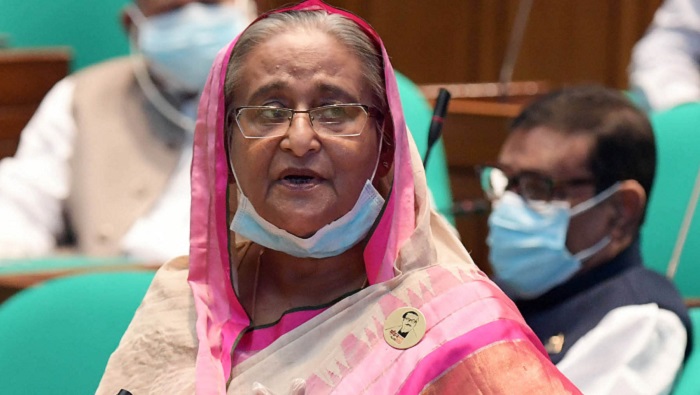 Prime Minister Sheikh Hasina on Thursday slammed political parties and organisations for criticising her government instead of standing by the countrymen amid the coronavirus crisis.

“There are many political parties, non-government organisations and volunteer organisations…many are criticising the government. But, how many of them have stood by the people right now?” she said while delivering her valedictory speech in the 8th session of the 11th Parliament.

The premier said leaders and activists of the ruling Awami League have been working for the people amid the deadly pandemic.

Sheikh Hasina, also the president of Awami League, said it was easy to find out faults by living at home.

“But standing by the people and carrying out other tasks were done by the soldiers of Bangabandhu Sheikh Mujibur Rahman. It is only we who have stood by the people in crisis,” she said.

Describing the way of work, the premier said there might have some people who could not seek support and even they do not have the income now.

“Food items have been sent to them silently. Those, who are taking the support, do not want to spread their names. It is because it hits their dignity. But, we have strong attention so that they cannot face any difficulty,” she said.

“Besides the government, the party has also been extending support to people,” she added.

The premier also spoke on the allegations of corruption amid the corona pandemic.

She said action against the corrupt will continue irrespective of their identities as the government will not tolerate irregularities.

“We will not tolerate these irregularities, surely not. We are taking actions, no matter who he or she is. And it’ll continue,” she said.

Her remarks came after several opposition MPs, including the deputy leader of the opposition Ghulam Muhammad Quader, raised the corruption issue in the health and financial sectors.

The premier said the military dictators had polluted this society by destroying the character of people to prolong their power after 1975.

“They had taught people how to resort to corruption, earn black money and not to repay loans. Overall, they had made this society polluted to sustain their power after capturing it illegally,” she said.

In the past, the premier said, people used to lead life following an ideology and policy, but the military dictators spoiled the character of people to make their power unchallenged.

Returning to power, Awami League started taking action against those engaged in corruption and irregularities without considering their political identities. “It matters little (to us) who belongs to which party.”

But, she said Awami League has been making all-out efforts to stop these (irregularities) and these efforts will continue.