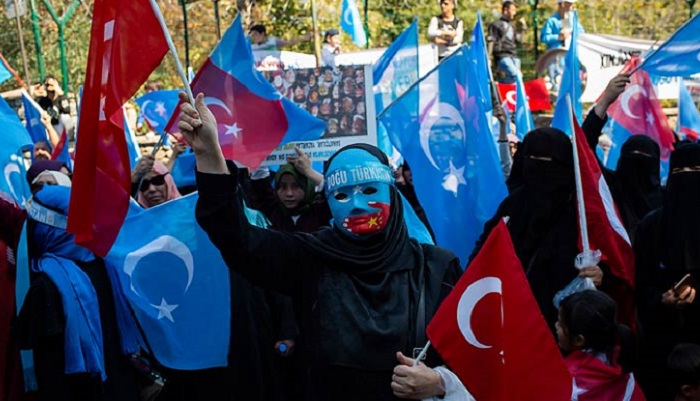 East Turkestan, the home of around 11 million people mostly Uighur Muslims have been forcibly annexed by China in the 1940s. Since then, the Chinese Communist regime has been continuing torture on innocent Uighurs. At a slight instigation, the Chinese authorities are giving death sentences to the protesting Uighurs who are kept in detention camps. They have even arrested Kui Chui Houjin, the famous poet of Xinjiang Province for speaking against Chinese atrocities. Mobile and internet have been banned and foreign media is not allowed to visit the detention camps. Around 2.5 million Uighurs Muslims have already left China and Chinese government is forcing Uighur Muslims youth to marry Buddhist girls in order to bring cultural change. Pregnant Uighur Muslim women are forced to abort. The Uighur women released from the detention camps have been given injections to stop menstruation. Many of them have been forced to take birth control pills. Recently US Customs has confiscated 13 tonnes of human hair worth US Dollars 8,00,000 which is believed to have come from Uighurs in Xinjiang whose beards and hairs have mercilessly cut.

The Chinese authorities have been continuing atrocities on Uighur Muslims in Xinjiang Province. Communist China has curbed their religious activities and even not allowing them to keep beard or offer Namaz in mosques. The Chinese authorities have started strict birth control measures to curb the Uighur population. Of late China has planned nuclear research and controlled nuclear explosion in Uighur province to scare the Muslim residents. The Uighur have requested intervention of the UN. The US has already ordered sanctions and curbs against China. But China, using massive money power and loan disbursement has forced many Muslim countries to remain silent on Uighur issue.

Meanwhile, US President Donald Trump has passed Uighur Human Rights Act 2020 in both the houses. This Bill placed sanctions on those perpetrators of crime against Uighur including the leaders of Communist Party of China. Analysts say China thinks Islam as their enemy. Chinese authorities have confiscated 3 lakh copies of Holy Quoran which were donated by Rabeta Al Alam Al Islami of Mecca, Saudi Arabia.

Chinese government is not allowing renovations of old mosques in Xinjiang, neither is allowing construction of new mosques. A mosque can be permitted to be renovated in special occasions if it resembles Buddhist temple.

Uighur Muslims are not allowed to offer Friday prayers. Innumerable mosques have been closed and madrasa education has been banned. Madrassas and shelter homes in more than 40 cities and villages in Xinjiang have been forcibly closed since 1996. Study of Turkish and Arabic are completely banned in Xinjiang.

The whole world knows what is going on in Xinjiang in the name of demographic genocide of innocent Uighur Muslims. The Muslim world is keeping mum as they receive huge financial assistance from China. But the Western countries have understood the real intention of China.

Uighur exiles urged the International Criminal Court recently to investigate Beijing for genocide and crimes against humanity, the first-ever attempt to use international law to hold China’s ruling Communist Party accountable for its draconian crackdown on the Muslim minority.

The lawyers’ 80-page filing includes a list of more than 30 Chinese officials they said were responsible for the campaign, including Xi Jinping, the Communist Party leader. Xi’s policies over recent years have put Muslim minorities in China’s western region of Xinjiang under a pervasive net of surveillance, detention and social re-engineering. As many as one million ethnic Uighurs and members of other Muslim minorities have been held in internment camps in the region, drawing growing global condemnation.

Evidence against China for atrocities against Uighur Muslims:

The ETGE considers East Turkistan (the region known as Xinjiang) to be a colony or occupied territory which as an independent state would be known as East Turkistan as it had been prior to Chinese Communist occupation in 1949. As set out in the Complaint to the ICC, crimes have historically been committed in East Turkistan by Chinese forces since 1884. The bulk of the Complaint focuses on the marked increase in crimes following the Urumqi massacre on 5th-7th July 2009, eleven years ago.

Lawyers representing the East Turkistan Government in Exile (ETGE) and the East Turkistan National Awakening Movement (ETNAM) have submitted a lengthy Complaint to the ICC asking the OTP to open an investigation into Genocide and other Crimes against Humanity allegedly committed against the Uyghur and other Turkic peoples of East Turkistan by senior Chinese Leaders including President Xi Jinping.

The Chinese Government has conducted a campaign to round up Uyghurs abroad and who have fled East Turkistan as a result of the crimes committed against them in China. They have been forced back into occupied East Turkistan including from Tajikistan and Cambodia. This has been carried out by Chinese officials and police. After being arrested and forcefully deported back into China, they have been subjected to human rights abuses and serious crimes. This is a breach of international law.

The evidence of the crimes provided in the Complaint is detailed and shocking. It includes descriptions of brutal torture through electrocution, humiliation in the form of being forced to eat pork and drink alcohol, mandatory insertion of IUD birth control for Uyghur women of child-bearing age- of which there is recent evidence of a major increase, and an estimated 5,00,000 Uyghur children being separated from their families and sent to “orphanage camps” where there have been credible reports of attempted suicide by the children.

The Complaint has been submitted in light of, and relies on, the decisions of ICC Pre-Trial Chambers I and III of 6 September 2018 and 14 November 2019 respectively (decisions related to Bangladesh and Myanmar in reference to Rohingya people), which clarified that the Court may exercise jurisdiction over international crimes under Article 12(2) (a) of the Statute when part of the criminal conduct takes place on the territory of a signatory. In this case, Tajikistan and Cambodia.

The crimes committed against the Uyghur people have been widespread and systematic. They have taken place on a mass scale and should therefore all be investigated in order to ascertain whether the alleged perpetrators can be charged and tried.

Now let us see whether the Muslim world, like the Western countries start realising the real intent if China and start criticising the Communist regime. Otherwise existence of 11 million Uyghurs will be in danger in near future.