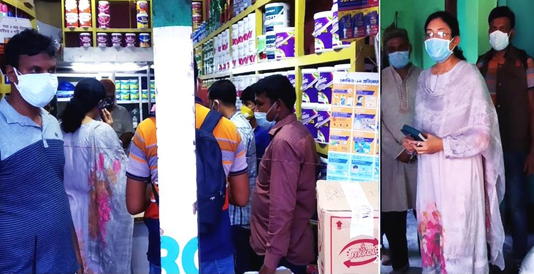 A mobile court initiated by Rangpur Metropolitan Police (RpMP) seized huge fake health safety materials from a house and two shops and destroyed those and fined Taka 35,000 in the city on Wednesday afternoon.

During the raids, the mobile court seized 1,000 bottles of fake Fixxol (1,000 ml each), 2,000 blank bottles of 1,000 ml fake Fixxol, 3,000 pieces of stickers for the bottles, 50 kg of chalk powder, 50 kg of white cement, 500 pieces of tiles pudding, 15 litres of chemicals, 20 of kg of chemical powders and other materials worth Taka two lakh from the house of Mostafizur Rahman in Baby Khan area of Rangpur city.

Later, the mobile court seized huge quantities of fake Fixxol worth Taka 50,000 from the shop of Dhirendra Nath Sarker at Betpotti area of the city, fined him Taka 5,000 and destroyed the seized fake health safety materials.

Yet in another raid, the mobile court seized huge quantities of fake Fixxol worth Taka one lakh from the shop of Md. Zahid at Betpotti area of the city in the evening, fined him Taka 10,000 and destroyed the fake health protection materials.