Coronavirus: Is India the next global hotspot? 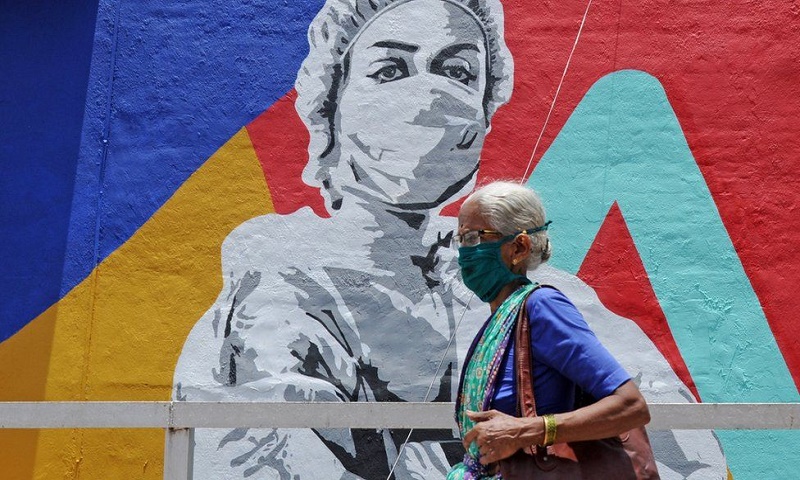 The coronavirus took hold slowly in India, but six months after its first confirmed infection it has overtaken Russia to record the world's third largest caseload.

With the world's second-largest population, much of which lives packed into cities, the country was perhaps always destined to become a global hotspot.

But the data behind its case numbers is questionable, because India is not testing enough, and an unusually low death rate has baffled scientists.

Here's five things we know about the spread of coronavirus in India.

India has seen a series of record spikes recently, adding tens of thousands of cases daily. It recorded most of its confirmed cases in June, within weeks of reopening after a rigid lockdown.

But the true scale of infection rates in the population is unclear, according to virologist Shahid Jameel.

The government conducted a random sample of 26,000 Indians in May, which showed that 0.73% had the virus. Some experts have reservations about the sample size, but others, such as Dr Jameel, say it's the only country-wide indicator they have to work with.

"If we extrapolate that to the whole population, we would have had 10 million infections in mid-May," Dr Jameel said.

Given that confirmed cases in India have been doubling every 20 days, that would put the current total between 30 and 40 million.

The gap between confirmed cases and actual infections exists in every country, but to different degrees. Testing is the only way to bridge it. "If you test more, you will find more," Dr Jameel said.

That's what has happened in India in recent weeks - as the government ramped up testing, case numbers suddenly increased.

India has done more than 10 million tests since 13 March, but more than half of those happened after 1 June.

2. India is just not testing enough

India's official caseload is high in absolute numbers, but it's relatively low in per capita terms. The world, on average, has three times as many cases as India per capita - a fact pointed out by the government recently.

But, according to Dr Jameel, India's per capita caseload is low simply because it tests so little.

Compare India to countries that have a high per capita caseload and you will find those countries are testing far more.

India's caseload is nearly invisible on this scale because its testing rate is so low.

But it's not just about how much you test, it's also about who you test.

India's emphasis on test and trace early on limited the pool of people it was testing to high-risk cases and their contacts - and kept it from expanding to the wider population.

Test and trace is insufficient once the infection starts to spread rapidly, said Himanshu Tyagi and Aditya Gopalan, mathematicians who have studied Covid-19 testing strategies. It helps with containment, but it does not discover new cases that have emerged undetected in the community, Mr Tyagi and Mr Gopalan said.

India has to test a broad swathe of people for that to happen. But how do we know who India is testing? Comparing testing numbers across countries is tricky because some count how many people they test, while others count how many tests they do. India does the latter and this number is slightly exaggerated because most people get tested more than once.

So instead, scientists prefer to calculate how many tests it takes to find a single confirmed case. The more tests it takes, the wider you are casting your net. Here, India fares poorly compared to countries that have managed to control the spread of the virus.

And the more widely you test, the lower your positive rate - that's why New Zealand and Taiwan have rates well below 1%.

India's positive rate is now up from 3.8% in April to 6.4% in July. If it keeps rising, it's because testing is still limited to a narrow pool of high-risk people and their contacts.

The data suggests that those in India who have been diagnosed with the virus are recovering from it faster than they are dying from it.

This is crucial, Dr Jameel said, because it determines the strain on the health system. Currently, deaths are rising more slowly than confirmed cases or recoveries - but if that rate quickens, it would increase the pressure on hospitals, possibly driving up deaths.

The caveat is that low testing rates means fewer new cases are recorded, and at a slower pace. That will quicken the recovery rate in comparison to that of confirmed cases.

Globally, India's recovery curve appears steeper than other badly hit countries - in this instance, a steeper curve is a good thing. It means Covid-19 patients in India are recovering faster than those in the US or Brazil.

India's share of recoveries - that is, the % of total confirmed cases in a given country that have made a full recovery - is also higher. At nearly 60%, it's far ahead of the US, where it is 27%.

When it comes to recovery though, data is patchy and the definition varies.

India defines as recovered anyone who tests positive for the virus and then, weeks later, tests negative. Some countries only count hospitalised cases that make a full recovery.

What's important is that, irrespective of how many people are recovering within each of these countries, India's share of recoveries is higher.

And that's because India's reported deaths are lower.

India has so far recorded about 20,160 deaths from Covid-19. In absolute numbers, that is the eighth highest tally in the world. But per million of the population, it is low.

"It's a fraction of what you are seeing in Western Europe," said Shamika Ravi, an economist and senior fellow at the Brookings Institution.

There have been a lot of questions around India's Covid-19 death figures, and most experts agree that they are likely being underreported.

But Dr Ravi said that did not explain the significant gap in death rates between India and Europe.

"If we were indeed having high death rates, no amount of data could have hidden that - that's 20-40 times as many deaths," she said.

India's low death rate is also similar to other countries in the region, such as Pakistan or Indonesia.

Theories range from a higher prevalence of infections in the region to a less virulent strain of the virus circulating in these countries to younger populations on average than badly hit Western nations, given that Covid-19 predominantly kills the elderly.

"Every country cannot be fudging its data," Dr Jameel said. "Maybe innate immunity in these populations is higher due to a high load of other infections. But we really do not know yet why their deaths rates are so low.

5. Each Indian state tells us a different story

Much like the US or the European Union, coronavirus statistics vary widely across India's states. Three states - Delhi, Maharashtra, and Tamil Nadu - account currently for about 60% of the country's caseload.

And as case numbers have waned in some areas, they have surged in others. The latest surge is in Karnataka and Telangana, in the south. Another southern state, Andhra Pradesh, is also seeing consistent and intense spikes.

India's response to the virus has so far been centralised, and that is part of what needs to change, experts said.

India would have to be "broken down into districts" to implement a successful strategy against coronavirus, Dr Jameel said, "because another national lockdown could be even less effective than the last one."

And rather than state-level snapshots, the authorities would need granular, localised data, according to Dr Ravi. "Every block, we must know if you have symptoms," she said.