Flood may hit 23 districts next week 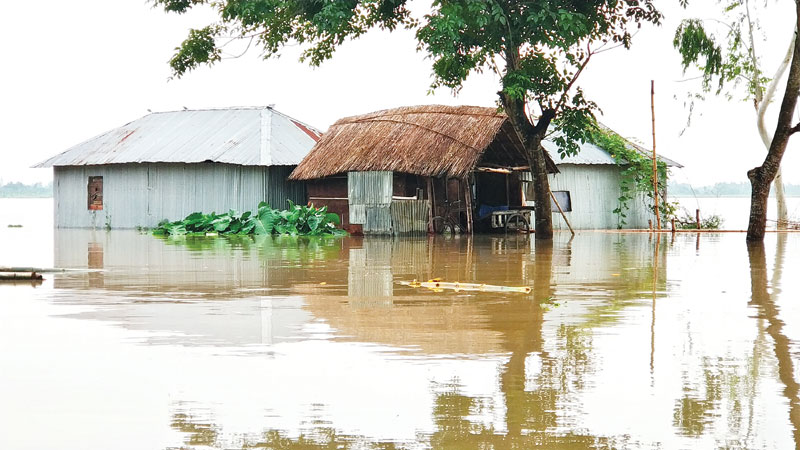 Though the overall flood situation has improved on Wednesday, a fresh flood may hit 23 districts in the country’s Northern, Northeastern and Central region next week.

The water level in Brahmaputra and Jamuna river may continue to rise from July 10 and will continue rising over the next eight days while the water may exceed the danger level at places, he said.

Flooding may occur in Lalmonirhat, Nilphamari and Rangpur districts as the water level of Teesta and Dharala is likely to increase after July 9, according to FFWC.

Padma River water may start to swell on July 11 and continue to rise over the next 10 days, and may reach the danger level at different places on July 12, said the official.

Fresh flood may also occur in Rajbari, Dhaka, Munshiganj, Faridpur, Madaripur, Shariatpur and Chandpur district during the time and continue till the month.

Fresh flood may also appear in Sylhet, Sunamganj and Netrokona districts due to a rise in water level in the Meghna basin, according to FFWC.

Meanwhile, millions of people marooned in floodwaters in 15 districts are looking for financial assistance in maintaining their families – many of them were displaced for the deluge.

The displaced people have to live in the open sky as their dwellings were washed away by floodwaters. Now, they are seeking assistance from the government or other organisations to erect their houses.

Local sources said the government has speed up relief distribution among the flood victims in the affected areas, but these are not adequate. They are seeking financial assistance to rebuild their dwellings.

More than 1.5 million people in 15 districts across the country have been affected by the devastating flood continuing in the country.

Marooned people have taken shelter on embankment, roads, highland and flood centres with their domestic animal and valuables as their houses have been washed away and crops have been damaged.

The river water was rising at 37 of the 101 points observed by the warning centre in the morning.

Six major rivers are flowing above their danger marks (DM) at 8 stations on the day, according to FFWC.