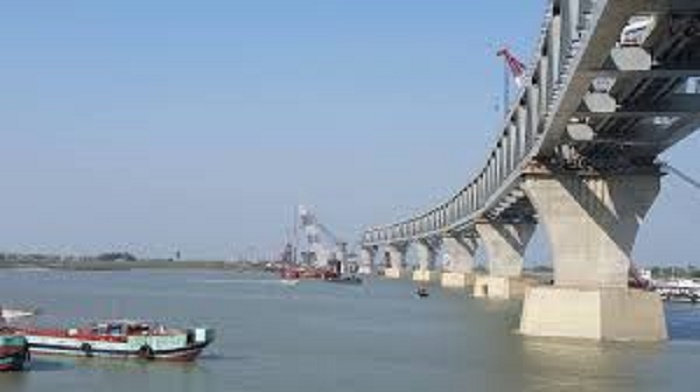 The planned installation of 32nd span of the underconstruction Padma Bridge is facing some delay because of strong current at the mighty river amid rainy season, project officials said on Tuesday.

Project engineers had a plan to install the span at Mawa point in late June after ending span-related work at Jajira point through installation of 31st span on piers no. 25 and 26 on June 10, making 4,650 metres out of 6.15km bridge visible.

“We had set a target to install the 32nd span of the bridge on June 30, but it could not be possible because of strong current at Padma,” Dewan Md Abdul Kader, Executive Engineer (bridge) of the project, told daily sun on Tuesday.

He added that they had completed the span fabrication, but the span carrying crane is not able to reach the installation site because of the strong current.

Even another span of the bridge is nearly to be installed at the Mawa point, the project engineer said.

Even after this setback, he also expressed optimism that they will be able to install all the remaining 10 spans by November as span fabrication is going in full swing now as the project has recovered from Corona shock.

“We hope that we will be able to complete installation of all the spans by next November. Once the spans are ready, it will be possible for us to install spans in a gap of seven or 10 days,” an upbeat Abdul Kader said.

A total of 4,500 workers, including 3,200 local workers, are now working at the project site although the number came down after Chinese workers got stuck in China after the country was hit by Coronavirus, according to project officials.

“We don’t have any Corona problem and workers shortage now. Recently, we’ve tested 163 workers, all of whom came negative,” noted Kader.

The problem of shortage in Chinese expert welding workers arose after the Corona crisis has also been overcome, the top project engineer added.

Meanwhile, all the five span fabrication materials have reached Mawa construction yard from China which were stuck in China after the virus outbreak there, according to project officials.

So far, the construction of the main bridge advanced 80.50 percent after installation of the 31st span in early June.

Once it comes into operation, the Padma Multipurpose Bridge will connect 21 south and southwestern districts with the capital and is expected to add an additional 1.2 percent growth to the country’s GDP.