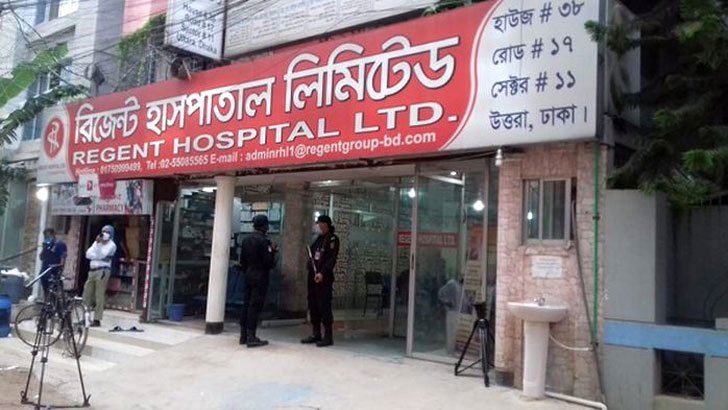 Regent Hospital in the capital was sealed off on Tuesday on charges of providing fake Covid-19 test reports for patients.

A mobile court of the Rapid Action Battalion sealed off the hospital in Uttara area.

Earlier, the mobile court found that the hospital provided fake Covid-19 reports to patients without testing their samples.

RAB Executive Magistrate Sarwar Alam conducted the operation along with a team of RAB-1.

Sarwar Alam said since the misdeeds took place from the head office, it was decided to seal off it as well as the hospital itself.

The hospital will be sealed once all the patients are transferred elsewhere.

RAB-1 Operation Officer Morshedul Hasan said 17 officials and staff of the hospital were held for interrogation in this connection.

The Directorate General of Health Services (DGHS) stopped all the activities of the hospital.

Dr Md Aminul Hasan, Director (Hospitals & Clinics) of the DGHS, said the hospital was ordered to close immediately under the Medical Practice Private Clinics and Laboratories (Regulation) Ordinance 1982, as various misdeeds were found against the hospital.

Earlier, on Monday, an RAB team conducted raided Uttara and Mirpur branches of Regent Hospital and found that it forged over 6,000 Covid-19 certificates and embezzled over Tk 3 crore in the name of providing Covid-19 testing facilities and treatments.

The elite-force also seized unauthorised testing kits and a car with a flag stand and sticker of the health department during the raid.

They suspected that owner and chairman of the hospital Md Shahed used to use the vehicle to avoid law enforcement agencies, Sarwar said.

The hospital authorities made an agreement with the Directorate General of Health Services (DGHS) in March, 2020, stating that it would treat Covid-19 patients for free.