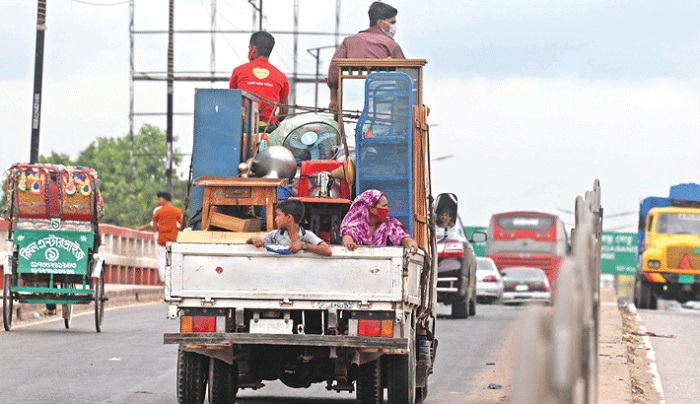 Hundreds of city dwellers, mostly lower and middle-income people, continue to migrate to their villages as the Covid-19 epidemic has either shrank their income or caused the loss of livelihoods.

Many of the jobless people have failed to survive in Dhaka and are leaving with bag and baggage while some others are selling out their hard-earned belongings before leaving this city.

On Sunday, Khorshed Alam, the owner of a mess at Kalabagan, was sent to jail by a Dhaka court for allegedly displacing important documents and belongings of 50 students, who were his tenants.

Recently, a Dhaka court sent a house owner to jail as she forced a tenant’s family to leave the house for failing to pay the rent of one month.

Earlier, she forced the family with three children to leave their rented house as they failed to pay one month’s rent.

Many such unemployed people along with their family members were seen leaving the capital with their belongings loaded into trucks and covert-van.

Numerous advertisements for house rents were seen in all parts of the city, particularly in the areas where low-income and lower-middle-income groups of people used to live.

Yunus Ali, a footpath hawker said, he could not afford house rents any more in the lingering coronavirus crisis that has badly affected his income.

“Many other lower-income families are also planning to leave the capital,” he said, adding that house rent is the largest expense in Dhaka.

In the meantime, people who managed to save their jobs with pay-cuts have sent their families to the villages. The single jobholders have left the family apartments and shifted to cheap shared flats.

Jahaingir Alam, an executive of a private company who has been living in Mirpur in the capital, finally had to leave the city along with 12 of colleagues as the company terminated them due to the COVID-19-induced business slump.

‘My house rent is Tk 25,000 but I have no income now,’ he said, adding that he left Dhaka at the beginning of July.

Bangladesh confirmed the first COVID-19 case on March 8. In April, the pandemic hit people’s income hard as a nationwide shutdown began on March 26 and continued till May 30 in a bid to contain the pandemic.

Offices and businesses were allowed to run under some restrictions after May 31.

Garment worker Anwar Hossain, who had been living in Dhaka’s Nakhalpara for the past 14 years, finally left Dhaka on June 19 as his factory cut his wage due amid the COVID-19 crisis. ‘It is impossible for me to continue living in Dhaka after my wage cut as house rent eats up 60 per cent of my income,’ he added. Anwar has no plan to come back to Dhaka ever as he thought that he failed to do anything for his family as well as for himself in the past 14 years.

BRAC Institute of Governance and Development and Power and Participation Research Centre in a recent survey found that 71 per cent people of the informal sector became jobless due to the shutdown enforced to curb the pandemic. The income of people who could barely work during the closure has dropped by 50–90 per cent, forcing them to cut costs, according to the survey. Bangladesh Garment Manufacturers and Exporters Association (BGMEA) estimated that 2.28 million garment workers in Bangladesh — the world’s second-largest clothing manufacturer after China — might lose their jobs as work orders of $3.18 billion has already been cancelled.

Besides, of that 55 per cent of 4.40 million transport workers, 57 per cent of 2.70 million domestic workers and 61 per cent of 10 million day labours lost their income amid the coronavirus crisis.

Meanwhile, Bangladesh Restaurant Owners Association said at least nine lakh people who used to process and cater foods, mostly in Dhaka, are on leave without any pay.

“The novel coronavirus fallout may wipe out the jobs as the restaurant business shows no sign of regaining momentum,” says Khondoker Ruhul Amin, president of the association.

Bahraine Sultan Bahar, president of the Bharatia Parishad, told the media that more than 50,000 tenants have already left the capital and more virus-hit people plan to follow suit.

“While leaving, many tenants sold the furniture at throwaway prices to clear the house rents. The landlords are pressuring them for the three-month dues,” he claimed.