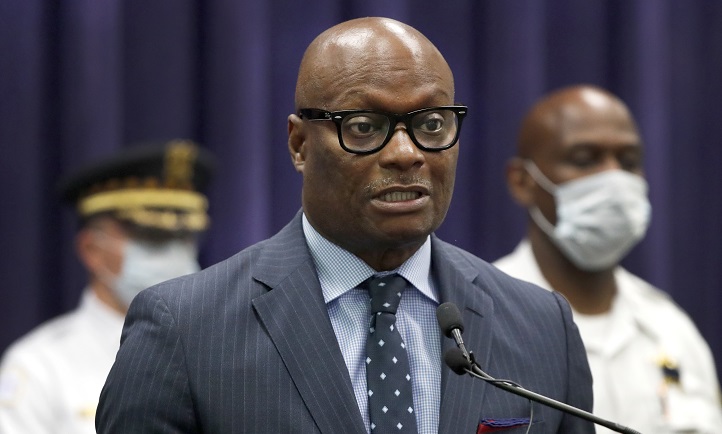 Chicago Police Superintendent David Brown responds to a question about the Memorial Day weekend violence during a news conference in Chicago, May 26, 2020. /AP

At least 17 people were killed and 63 others injured in Chicago over the Independence Day holiday weekend as a result of gun violence. The victims included two children, one is a 7-year-old girl and the other a 14-year-old boy.

The Chicago Police Department added more than 1,200 extra officers to work during the holiday weekend in response to violence that has occurred since Memorial Day weekend.

In one shooting, just before midnight Saturday, four males opened fire on a large gathering in the street in the Englewood neighborhood, police spokesman Tom Ahern said. Two males died at the scene and two more, including a 14-year-old boy, died at a hospital, Ahern said.

Four others were injured, with one in critical condition and the other three in fair condition, Ahern said. The four attackers fled the scene. No one was arrested.

The 7-year-old girl was fatally shot in the head while standing on the sidewalk at her grandmother's house during a Fourth of July party around 7 p.m. in the Austin neighborhood, police said.

A 32-year-old man was injured in the shooting and was in fair condition. The Chicago Sun-Times, citing police, said that seven of those injured in shootings were minors.

Suspects got out of a car and began shooting, police said. No one has been arrested.

In face of the latest spate of gun violence, Mayor Lori Lightfoot tweeted on Saturday night: "As families gather to commemorate the founding of our nation, we must ask ourselves: is this who we are as a city or as a country? We cannot grow numb to this. We are making progress in slowing shootings, but we have to do better, every single one of us."

Police Superintendent David Brown said at a news conference on Thursday that the city would run "strategic missions" to recover illegal guns and work with violence prevention community groups.

The shootings over the Independence Day weekend followed the tragedy of last week's shooting of a 1-year-old boy, who was killed while riding in a car with his mother, and a 10-year-old girl who was inside her home when a bullet fired a block away pierced a window and struck her in the head as she sat on a couch.

Over the long Fourth of July weekend in 2019, six people were killed and 63 were wounded by gun violence.

The last time the Fourth of July fell on a Saturday was in 2015, when 10 were killed and 55 others were injured.