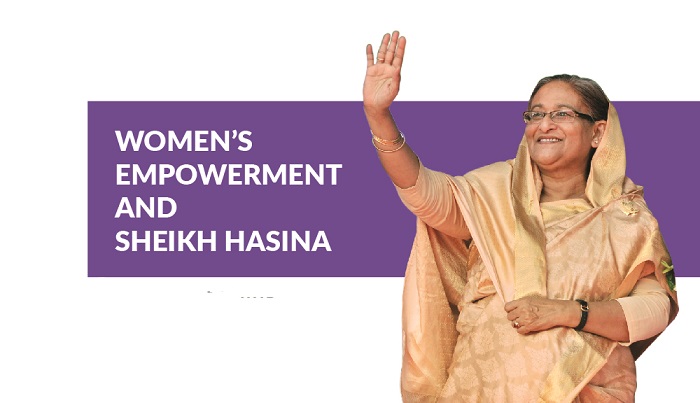 Prime Minister Sheikh Hasina has become a pioneer of women empowerment as her government is working relentlessly for the development of women by bringing them into the mainstream in the society.

Women are now carrying out key responsibilities in various fields, including politics, administration and law enforcement agencies under the Awami League-led government of Sheikh Hasina.

Even, some constitutional positions have been adorned by women and they have been discharging their responsibilities with utmost sincerity, which bears the testimony of women empowerment.

In the country’s history, Dr Shirin Sharmin Chaudhury became the first woman to be elected as the Speaker of Jatiya Sangsad (National Parliament) in April in 2013.

Dr Shirin Sharmin was re-elected twice as the Speaker after the Awami League-led government assumed office through the January 5, 2014 and December 30, 2018  polls.

As part of her government’s efforts for the women empowerment, Prime Minister Sheikh Hasina increased the women reserved seats in Parliament to 50 from 45.

A woman was also appointed as election commissioner while several women were promoted to the post of Secretary during the rule of Awami League   government.

In fact, women are working in almost every field---whether it is riding a bike or the aircraft.

Bangladesh has been placed in a remarkable position in the globe in women empowerment in the last one decade due to the visionary leadership of Sheikh Hasina.

Without confining them in household work, women are making a strong ground from grass roots to the central level.

UK Minister of State for the Commonwealth, UN and South Asia Lord Tariq Ahmad has highly appreciated the role of Prime Minister Sheikh Hasina in empowering women and promoting their education.

“I had the opportunity to meet Bangladesh Prime Minister Sheikh Hasina. I know that she is playing a pivotal role in women empowerment and women education,” he said.

The UK minister made the comment while addressing the inaugural ceremony of the Commonwealth Fair 2019 at Kensington Town Hall in London on November 9 in 2019.

Sheikh Hasina got recognition from Unesco for her tireless efforts to promote girls’ education in Bangladesh.

Unesco presented a memento titled, ‘Peace Tree’, to the prime minister in recognition of her outstanding contribution to girls’ and women education.

Prime Minister Sheikh Hasina has been bestowed with the UN-women ‘Planet 50-50 Champion’ and Global Partnership Forum ‘Agent of Change Award’ in 2016.

As part of her government’s efforts, massive activities are on to ensure women empowerment in economic, social and political arena. Laws have also been enacted to resist women repression.

For the fourth time in a row, Bangladesh held the top position among South Asian countries in ensuring gender equality.

“Bangladesh consolidates its position as the region's top performer and breaks into the top five in the global index on the Political Empowerment sub-index this year, recording progress on closing its political gender gap, despite a widening gender gap in terms of labour force participation,” according to World Economic Forum's 'The Global Gender Gap Report 2018.

Official statistic shows that some 13,620 women have been discharging responsibilities in 4,540 union parishads across the country.

The government also appointed women as justice, deputy commissioner and superintendent of police.

It is the Awami League-led government which first promoted a woman to the post of the Secretary and appointed deputy governor of Bangladesh Bank.

The post of the ambassador was adorned by a woman. Important posts in army, navy, air were also adorned by women.

The Awami League government for the first time appointed a female vice chancellor at Jahangirnagar University while appointed a pro-VC at Dhaka University and Bangabandhu Sheikh Mujib Medical University.

Statistic also shows that some 57 per cent is working women in Bangladesh while the figure is only 29 per cent in India.

Bangladesh is also ahead in women literacy and education.