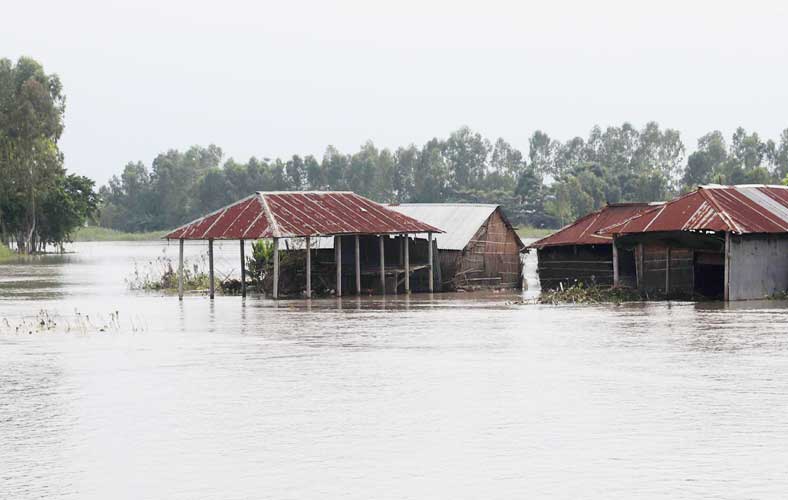 Water levels of major rivers marked sharp falls at all points following further recession of onrushing water from the upstream improving the flood situation in the Brahmaputra basin in the last 24 hours ending at 9 am on Sunday.

Water levels of the Brahmaputra marked sharp falls by 22cm at Noonkhawa and 18cm at Chilmari points in Kurigram during the period to flow above the DMs by only 2cm and 11cm at these points respectively at 9 am.

At the same time, water levels of the Jamuna marked falls by 15cm at Fulchhari in Gaibandha, 17cm at Bahadurabad in Jamalpur, 12cm at Sariakandi in Bogura and 13cm at Kazipur and 23cm at Sirajganj points in Sirajganj districts.

The Jamuna was flowing 41cm above the DM at Fulchhari, 42cm at Bahadurabad, 39cm at Sariakandi, 42cm at Kazipur and 23cm at Sirajganj points respectively at 9 am.

With further falls in water levels of the Dharla and Ghagot during the period by 15cm at Kurigram and 18cm at Gaibandha, the rivers were flowing above their DMs by 51cm and 8cm at these points respectively at 9 am.

Meanwhile, the water level of the Teesta marked a sharp fall by 46cm at Dalia point in Nilphamari during the same period and was flowing 28cm below the DM there at 9 am today.

“The flood situation marked improvement in Nilphamari and adjoining Lalmonirhat districts,” Executive Engineer of the Teesta Barrage Project (TBP) Division of BWDB M Rabiul Islam said, adding that the improving is likely to continue in the next 24 hours.

Talking to BSS this afternoon, BWDB officials said all flood control embankments and structures are remaining safe in the flood-affected seven northern districts.

However, sporadic incidents of riverbank erosion have been reported from Kurigram, Gaibandha, Lalmonirhat, Jamalpur and Bogura districts due to stronger water current following recession of floodwater with the falling water levels.

Executive Engineer of BWDB Mokhlesur Rahman for Gaibandha said riverbank protection works are continuing in full swing at four points and will begin the same at 12 other points soon alongside the major rivers in the district.

Executive Engineer of BWDB Ariful Islam for Kurigram said water levels of the Brahmaputra and Dharla are continuing to recede improving the flood situation today in the district where erosion of riverbanks have been reported from some points.

“Sporadic incidents of riverbank erosion have been reported from over 15 points and protection works have already begun at seven points and all flood control structures are remaining safe in the district,” Ariful added.

“We are closely monitoring flood situation and safety of flood control structures and conducting riverbank protection works at several points in Kurigram, Gaibandha and Lalmonirhat,” he said.

Divisional Commissioner KM Tariqul Islam said massive relief activities are being conducted among flood-hit people to mitigate their sufferings in Rangpur division where the flood situation continues to show an improving trend.