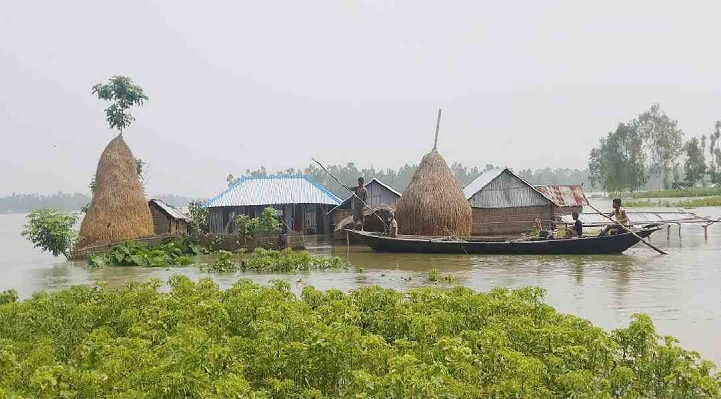 Although the flood situation in Kurigram district has improved a little bit, the sufferings of people have intensified for lack of relief materials and 'mismanagement' in their distribution.

Local public representatives claimed that the relief materials allocated for their areas are too inadequate to assuage the sufferings of flood victims, and they could not provide any relief for over nine days.

The DC claimed the relief items were distributed at union level in coordination with all the local public representatives.

While visiting unions in nine upazilas of the district, the UNB correspondent found some discrepancies in allocation of relief materials for the distressed people.

Akmal Hossain, chairman of Bollov Khash Union Parishad, said they are yet to make any list of affected people as relief items have not reached his union.

Chairman of Astomir Char Union Abu Taleb complained that there was no relief material for over 3,000 flood-hit people in his union.

The UNB correspondent tried to reach Chilpmari UNO AWM Rayhan Shah over phone to know about that but failed.

Rezaul Karim Amin, chairman of Bojra UP in Ulipur upazila, said he received only 200 packets of relief materials for over 2,000 flood victims in his union.

Belal Hossain, chairman of Begumganj UP in the same upazila, said they received only 300 packets of relief materials for more than 3,000 flood-hit people.

Asked about the shortage in relief supply, Ulipur UNO Abdul Quader said, “The relief materials were distributed as per the ratio of affected people.”

About the ratio and allocation for his upazila, Quader said he will inform it once he receives information from the Relief Department.

According to information received from three unions in Char Rajibpur upazila, 2,900 families among 17,250 were provided with relief materials.

Meanwhile, water in the Brahmaputra River was flowing 13cm above the danger level at Chilmari point while Dharla 52cm above the red mark at Dharla Bridge point on Sunday morning.

However, the Teesta River was flowing 20cm below the danger mark at Kaunia point.