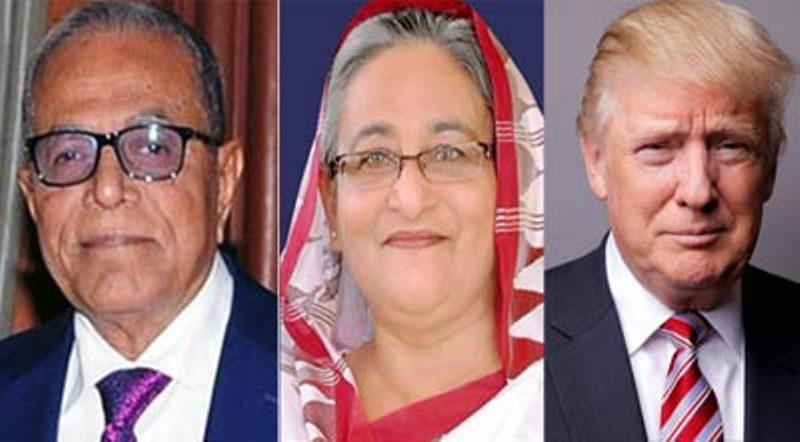 President Md Abdul Hamid and Prime Minister Sheikh Hasina congratulated US President Donald J Trump on the occasion of the 244th Anniversary of the Declaration of the United States of America.

In a congratulatory message, the President said Bangladesh and the United States are close friends and trusted partners, according to a message received from Bangladesh Embassy in Washington DC today (Saturday).

“Our countries are united through shared values of freedom and principles of democracy. Based on these commonalities, we have been working together to expand our relations in every possible way,” he said.

The President expressed gratitude to the United States for its continued support to Bangladesh in dealing with the Rohingya issue.

“I strongly believe that the partnership between our two countries and the peoples would be further strengthened and flourished in the coming days through our collective efforts,” the President said.

Prime Minister Sheikh Hasina in her message said Bangladesh and the United States are great partners with common aspirations of their peoples to uphold shared values of freedom and principles of democracy.

“Based on the principles and values of the two societies, we have strengthened our friendship and institutional partnership,” she said.

The Prime Minister said: “It is great to see that over the period of time, our bilateral engagements have become multifaceted and flourished beyond the spheres of trade, investment and development assistance.”

She said: “We recognize and value each other as important partners in many areas including counter-terrorism and countering violent extremism, disaster management, women empowerment, human rights, global security, and peacekeeping.”

The PM said: “We are deeply grateful to the United States for its strong and continued support to Bangladesh in dealing with the Rohingya issue.”

Sheikh Hasina expressed the hope that the bonds of friendship between the two countries would continue to deepen, broaden and strengthen in the days ahead.