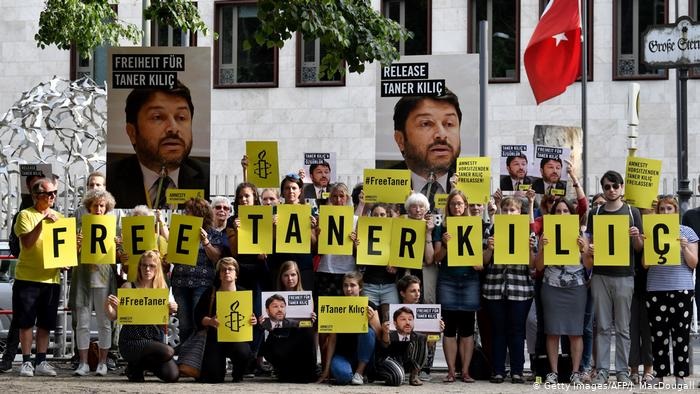 Idil Eser, former Amnesty Turkey director, was among three people sentenced to one year and thirteen months for "helping a terrorist organisation".

The court acquitted seven other activists including Peter Steudtner, a German citizen, and Ali Gharavi, who is Swedish.

"This is an outrage. Absurd allegations. No evidence. After three year trial Taner Kiliç convicted for membership of a terrorist organization," Amnesty's Andrew Gardner tweeted.

"The torment continues. We won't give up until all are acquitted," Gardner added.

The activists had been accused of seeking to wreak "chaos in society" -- a similar charge to the one brought against protesters whose anti-government demonstrations in the summer of 2013 shook Turkey.

Kilic, now Amnesty's honorary chair, was released on bail in August 2018 after 14 months in jail.

He is accused of links to the movement led by US-based Muslim preacher Fethullah Gulen, which is outlawed in Turkey.

Ankara accuses Gulen of ordering the 2016 attempted overthrow of President Recep Tayyip Erdogan but he denies the claim.

But a police report showed Kilic did not have the application on his phone.

Critics claim the government has targeted civil society in Turkey following the 2016 coup attempt which saw tens of thousands of people arrested over alleged links to Gulen including rights defenders and journalists.