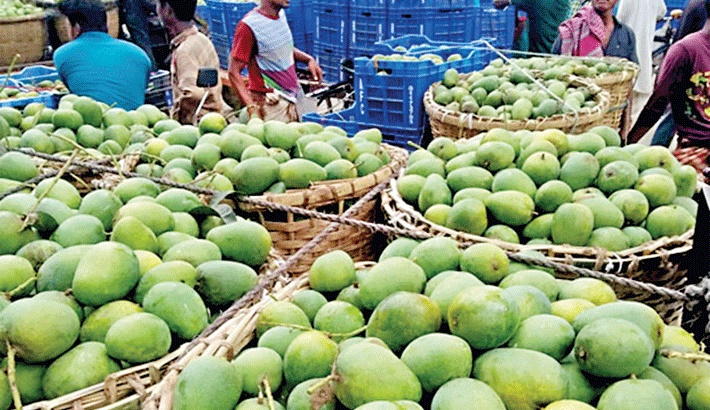 Mango exports from Bangladesh have drastically declined due to suspension of international flights following the outbreak of coronavirus pandemic across the world.

On March 21, Bangladesh cancelled all the international passenger flights with 10 countries until March 31 that was later extended to restrict the spread of the virus.

Favourable weather condition and precautionary measures taken by the mango orchard owners and mango farmers give them hope for a good yield.

He said due to the efforts of the farmers in several mango producing districts including Satkhira, Chapainawabganj, Rajshahi and Chattogram have produced a huge improved quality of exportable mango in the country.

The Hortex Foundation of the Ministry of Agriculture conducted discussions with buyers, and ensured that all necessary certification was provided for export, he said.

There was a good prospect of mango export from the mango growers and exporter, he said, adding that both upstream and ethnic market was the target to export mango but Covid-19 hampered it.

This year the target of mango export was around 1,000 tonnes but only 18 metric tonnes have been exported, said the official.

In 2015, a total of 800 metric tonnesof mangoeswere exported but it declined to 300 tonnes in 2016 due to the failure to meet certain phytosanitary requirements enforced in its export market especially the EU.

Mango export has been increasing in the country supported by the Department of Agriculture Extension (DAE) by ensuring pest-free, disease or chemical contamination-free mango.

Mango from Naniachar in Rangamati districts was exported to European Union countries this season. A total of 2,600 KG mangoes of Langra, Himsagor and Amrapoli varieties have been exported to Italy and 400 Kg to United Kingdom, according to the Ministry of Agriculture.

The exporters also got export order of 8500 Kg mango from different European Union countries this season.

Farming of mango has been increasing each year as farmers are earning huge profits by cultivating high yielding and hybrid varieties with traditional and popular indigenous varieties.

Amropali contributes 35 percent of the mango production against the total mango produced in the country.

So far 74 different fruits are being produced in the country and mango is the second largest producing fruits in the country while banana ranksfirst.