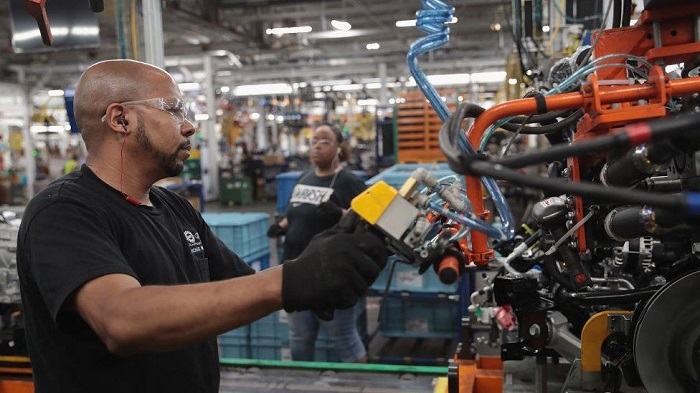 The US economy created jobs at a record pace in June as firms took on more staff after the coronavirus downturn.

Payrolls surged 4.8 million, the most since the Labor Department began keeping records in 1939, helped by the reopening of factories and restaurants.

But a recent spike in Covid-19 cases has raised fears for continued growth.

June's rise is far higher than the 3 million jobs many economists forecast would be created last month.

However, separate Labor Department data also showed that in the week ending 27 June, initial claims for unemployment fell only slightly, to 1.43 million, on the previous week.

Companies, including in populous states like California, Florida and Texas, plan to scale back or delay reopening due to the fresh coronavirus outbreaks, which would hold back hiring.

This week, Federal Reserve chairman Jerome Powell acknowledged the rebound in activity, saying the economy had "entered an important new phase". But he warned that continuing growth would depend on "our success in containing the virus".

And despite two straight months of jobs growth, employment is still about 15 million below its pre-pandemic level, with the jobless rate just above 11%.

The US Labor Department said the leisure and hospitality sector added more than 2 million jobs and retail added 740,000.

The resumption of routine medical appointments also helped, with healthcare employment rising 568,000. The reopening of factories meant manufacturing employment continued to rebound, rising by 356,000, driven mostly by a 195,000 gain in the car industry.

The surge in job creation in the past two months has been spurred by the government's Paycheck Protection Program, which gives businesses loans that can be partially forgiven if used for wages. But those funds are drying up.

Michael Pearce, senior US economist at Capital Economics, said he expects "the recovery from here will be a lot bumpier and job gains far slower on average".