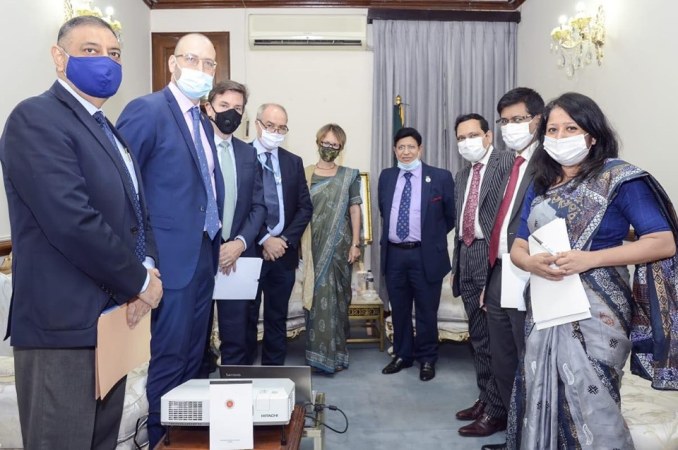 Dhaka has sought close collaboration and strong partnership between Bangladesh and the UN and aspired to get substantial allocation from the UN’s response and recovery fund to manage the COVID19 impact.

Foreign Minister Dr A K Abdul Momen made the urge while a five member UN country team led by its Resident Coordinator in Bangladesh Mia Seppo called on him at the State Guest House Jamuna on Wednesday.

During the meeting Dr Momen highlighted the impressive economic growth of Bangladesh including spectacular progress in the areas of poverty reduction, improvement in the life expectancy, reduction of maternal and child mortality, women empowerment and other socio-economic sectors.

He also informed that despite the onslaught of COVID19, Bangladesh successfully submitted on time its second Voluntary National Response of SDG implementation.

“However, COVID 19 may impede the progresses in the area of SDG achievements and our graduation trajectory,” the Foreign Minister apprehended.

In this regard, he emphasized the need to have a coordinated partnership with the UN so that our ongoing endeavours remain on track.

The Foreign Minister feared the negative impact of the pandemic in RMG and expatriate employment-two of the mainstays of Bangladesh’s economy.

He expressed concern about the returnee migrant workers and sought UN’s assistance for re-skilling, re-employment and re-integration of them.

He expressed hope that considering the large population size, Bangladesh should receive a substantial allocation from the UN's response and recovery fund.

The Foreign Minister highlighted the climate vulnerability of Bangladesh and reminded about the responsibility of the developed countries in mitigation of climatic impact in light of the Paris Agreement.

“Bangladesh as the current Chair of the Climate Vulnerable Forum will work with all concerned to ensure climate justice.”

He also sought support from the UN bodies for the establishment of the Global climate adaptation center as well as an Innovation and knowledge center to promote South-South Cooperation.

“The world has a lot to learn from Bangladesh on climate adaptation,” says the UN Resident Coordinator.

While Dr Momen thanked the UN agencies for their continued support on the Rohingya issue, he expressed deep concern that there was no progress in repatriation of Rohingyas to Myanmar.

The ongoing violence and continued military offensive and resultant instability in the Rakhine province are forcing Myanmar nationals to flee and take perilous journeys by the land and sea in search for safety and security.

This has broader ramifications on the overall repatriation as Myanmar is failing to create conditions conducive for safe and sustainable return of the Rohingyas.

In this regard, the Foreign Minister pressed the UN to work with Myanmar more constructively under the framework of the existing tripartite mechanism.

The UN team thanked the Foreign Minister for highlighting issues of importance to Bangladesh and providing guidance on how the UN agencies in Bangladesh can effectively partner with Bangladesh in its journey towards economic prosperity.

The UN team mentioned that since Bangladesh joined the UN in 1974, the UN agencies are constructively engaged with Bangladesh in its pursuit of socio-economic development.

The Resident coordinator assured of the UN’s full support for Bangladesh to recover from the socio-economic shocks of the Covid-19.

They reiterated the UN’s commitment to remain seized with the issue of Rohingya repatriation including through engaging more constructively with Myanmar.