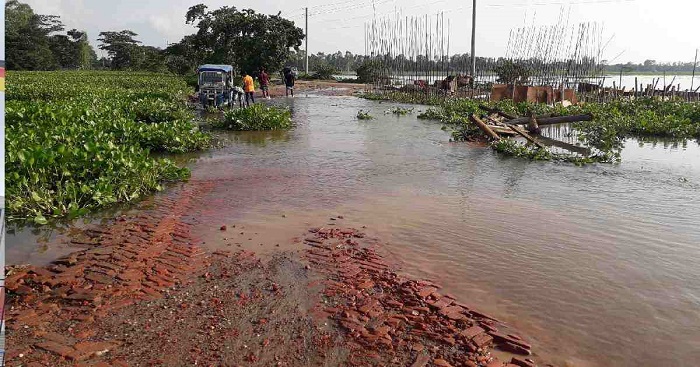 Thousands of people of three upazilas of Sunamganj district have been suffering a lot as Kathir-Jaynagar road in Sadar upazila has become dilapidated and unfit for movement.

Although  renovation work was carried out on Kathir-Jaynagar road just a year ago some big potholes have been developed  in many parts of the road, making tit unfit for use.

According to the sources at Local Government Engineering Department (LGED), the government  allocated Tk 78 lakh for the renovation work of the11 kilometer road stretching from Hossainnagar-Joynagar bazar, a portion of Madanpur-Jamalganj road in the fiscal year 2017-2018.

Two contractor firms--‘Mahbub Enterprise’ and ‘JR Enterprise’ got the task of the renovation work of the road.

But after one year of the repair work, the road stretching from Hossainnagar to Sardarpur point has turned dilapidated, causing immense sufferings to locals.

Several thousand people of three upazilas ---Jamalganj, South Sunamganj and Sadar upazilas--- use  the road for going to the district headquarters and other divisional cities including Sylhet.

Local people alleged that the road has become risky for movement due to use of substandard materials during the renovation work.

Abu Talib Al Murad, a resident of Barma Uttar vilalge in Mohonpur union, said, “Though the government allocated money for the repair work of the road on regular basis but to no use.”

Saju Talukdar, a resident of Mohonpur village, said “We requested the authorities concerned to repair the work following the government rules but they did not pay any heed to our request.”

Director of the contractor firm, ‘JR Enterprise’ Mohamamd Ripon, said, “We had to count loss while doing the repair work of the road. Though our contract time had expired but we filled up the potholes created on the road.”

Anwar Hossain, engineer of Local Government Division, Sadar upazila, said, “We have given a proposal for the renovation of the road under a big project. Besides, we also sent a letter to the contractor firm concerned to repair the dilapidated parts of the road.”