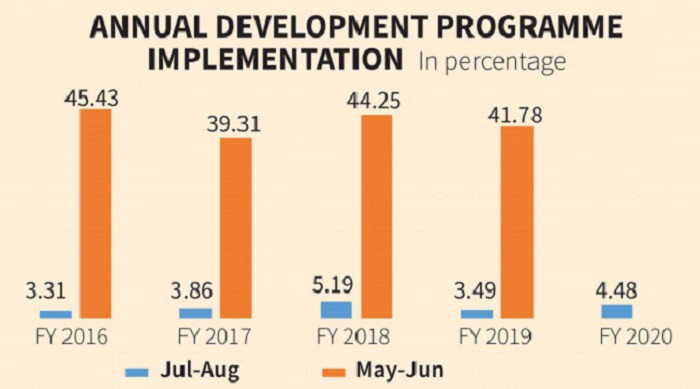 Executing the development plan rolled out for the new fiscal year is going to be a daunting task for the government given the prevailing unusual situation created by Covid-19.

But a better output can be yielded out of the plan, prioritising the economy by transforming large ADP schemes and focusing more on those which can leverage new opportunities stemming from by the crisis, suggests economic analysts.

At the same time, health related projects and action plans should get special priority so that the spread of virus infection can be reined in to revamp the economy derailed by the pandemic.

“ADP implementation is perhaps going to be the lowest in recent memory. The reason is known to all. Executing new ADP will be very challenging. On the other hand, the situation is not likely to change much in the next six months,” observed Dr Jahid Hussain, the former lead economist at World Bank’s Dhaka office.

He also predicted that ADP progress will not cross 30 to 40 percent in the first six or seven months of 2020-21 fiscal year.

The allocation drew huge flak from economists, who termed the plan “unrealistic” and said it is not executable given the present context that brought most ADP projects to a halt amid the corona lockdown in the just-concluded FY20.

Policymakers, on the other hand, defended the new development spending plan, saying that the government was bold in taking up a large ADP undermining the crisis as development projects are the main driver of growth.

“ADP implementation will definitely be challenging for the government as the country and the whole world are passing through a crisis moment,” commented Dr Shamsul Alam, Member of General Economics Division (GED) that formulates most of long and mid-term development plans.

“But the government was brave enough to adopt a big ADP this year because it is the only means to move the wheel of growth,” he added. “We’ve to face the crisis boldly.”

Besides, the government has stressed on timely and quality ADP implementation this year with putting in place stricter monitoring and quarterly evaluation of ADP projects, he also pointed out.

During the first 11 months of FY’20, ADP achievement nosedived year-on-year from nearly 68 percent in FY’19 to 57.37 percent with a negative growth in volume of expenditure.

This performance is likely to see some improvement after June when 12 months’ figures will be available. Usually, a large amount of bills are paid to contractors at the closing month of June.

Dr Jahid Hussain suggested that the government should be more focused on important projects like Padma bridge, Padma rail link, Metro rail and some other growth driving projects this year instead of focusing on the whole ADP.

The project work can be kept running with maintaining health safety to bring confidence among project people and with introducing remote supervision by the foreign consultants, he also suggested.

The government should also put more focus on making ready the Chinese and Japanese economic zones quickly to woo foreign investments to cash in on new windows of economic opportunities created for the country amid the corona crisis, Dr Jahid said, also putting importance on raising local investment.

The noted economist also thinks that the government must attach importance to health projects and some emergency health action plans this fiscal year to prevent the virus infection.

He said curbing infection is going to be very important for the country in terms of saving lives as well as reviving the economy as it will create confidence among the investors and consumers.

The PMO stressed that the continuation of the development work is very important for ensuring coordination among lives and livelihoods.

At the same time, it also issued instruction to safeguard project consultants, technicians and workers from the virus infection.