Vibrant agriculture led by PM is our best bet 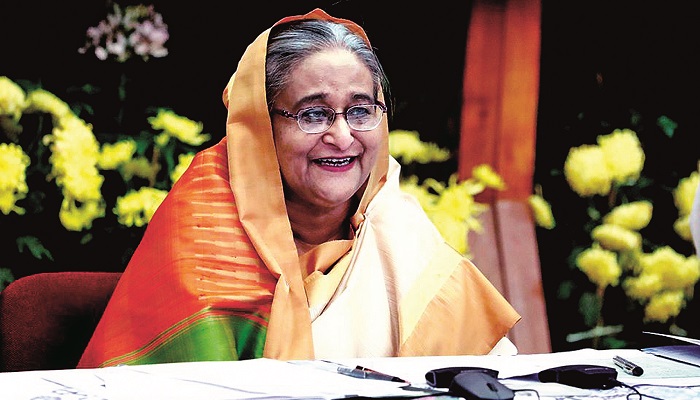 Despite the growing spectre of deeper economic recession following the on-going pandemic throughout the world, Bangladesh stands better in facing it mainly due to its vibrant rural economy led by agriculture. The FAO has just announced that Bangladesh will experience food surplus even in this difficult year of pandemic. Against the total demand of about 33 million metric tons of cereals, it is expected that the total production will be around 40 million this year. This production figure is almost fifty per cent higher than what it was in 2009. Thanks to the bumper Boro and its successful harvesting with unprecedented mobilisation of labour and machines by Sheikh Hasina government in the thick of the corona crisis, Bangladesh looks so much better off in providing minimum food to its entire population. However, we need to keep our eyes open on the unfolding regional floods that may put additional challenges to our rural economy, particularly in remote char and haor areas.

Of course, supply of food alone does not ensure food security. People need to have purchasing power to buy the food. The government, in the meantime, has increased its social protection, both in kind and cash, to provide the minimum support to millions of population for survival against hunger. However, the sudden loss in income among those involved in informal sector has created a new challenge for the new poor. The government, non-government organisations and the community as a whole have come forward to stand by these hapless people during this difficult period of pandemic.

But even then many of the low-income families have been living urban areas to find refuge in the rural Bangladesh with a hope that at least the low-cost food of all kinds will be available there. And the community is also supportive to these return migrants, both from within the country and abroad. The health hazard, no doubt, still remains formidable and the government is focusing on this challenge as the first priority as reflected in its latest budget. This has been followed by financial support to social protection and agriculture. At the same time, the government has announced more than a trillion Taka stimulus packages to cope with the economic challenges thrown out by the unprecedented pandemic. One can certainly find faults in the pace and mechanisms of implementation of these stimulus but at the same time it must also be appreciated that the Government led by HPM Sheikh Hasina had the guts to go ahead with the stimulus packages estimated to be around four per cent of GDP to keep the economy afloat at a time when the resource mobilisation has also been constrained. This was supposed to be one of the record year of economic growth and as well as that of poverty reduction. But this sudden attack of the unknown virus has put all our plans and programs upside down. Even then, the strong leadership in-built in our Prime Minister could come up with such an elaborate strategy of immediate, short, medium and long terms economic recovery mainly because of our stronger foundation of vibrant rural economy led by consistently growing agriculture.

Our agriculture has indeed come of an age, thanks to the unprecedented policy support to the sector by the government led by Sheikh Hasina. I remember, the decision to increase subsidy to agriculture was taken as soon as the cabinet led by her took oath in early 2009. The then Agriculture Minister Matia Chowdhury with full support from HPM announced drastic reduction in prices of fertiliser within hours of taking the oath. And this policy support in terms of subsidy (in reality an investment) not only in fertiliser but also in other inputs like seeds, electricity, insecticide, mechanisation and, of course, research and development has been continuing till today. In fact, this year’s budget provides 5.3 per cent of total outlay to agriculture with the highest subsidy of BDT 9,501 crore in recent years. In addition, a huge project of BDT 3,198 crore has been allocated for incentivising mechanisation. Another fund of BDT 200 crore has been created for supply of seeds and farm mechanisation. A robust stimulus package of Taka 5,000 crore has been announced by the government to provide low-cost credit to the farmers. Another refinancing scheme of BDT 3,000 has been created to fund the MFIs to support rural entrepreneurs including farmers. Bangladesh Bank has also announced a refinance line of BDT 10,000 crore to support 505 of the stimulus given to banks and Financial Institutions to support MSMEs. A part of this refinance will certainly go to rural entrepreneurs including farmers who are highly diversified and creative. Many of them have emerged as micro entrepreneurs engaged in poultry, fisheries, livestock and many related non-farm activities. A separate support fund of BDT 2,000 crore has also been created to rehabilitate return migrants from urban areas of Bangladesh and abroad to transform them as entrepreneurs with the support of three specialised banks and PKSF. The unemployed rural youths will get seed money for self-employment ventures in agricultural production, agro-based service, small businesses, cottage and small industries. Bangladesh Bank is also mulling of creating another BDT 500 crore for the Ansar-VDP Unnayan Bank for supporting rural entrepreneurship development. The government has also been consistently investing in research and development of climate-resilient seed varieties and as many as 109 of them have already been developed by our agricultural scientists over the last decade.

It is because of this focused support from the government in general and HPM in particular that Bangladesh has emerged as a climate resilient vibrant country with spectacular success in various fields of agricultural production. As a result Bangladesh has been able to secure the positions of 10th largest grain producer, 3rd largest rice and vegetable producer, 3rd largest fish producer and 7th largest mango producer of the world. It now produces 72 varieties of fruits with average per capita consumption of 85 grams of the same. It was also able to export to export USD 678 million agricultural commodities in 2018. It has, indeed, made a spectacular success in agro-processing industry during the last decade. Our agro-processed products are all around in our neighbouring North East states of India and many other countries of the world. More than 11 million farmers have opened Ten Taka bank accounts during the last decade. Another seventy million plus, mostly rural, mobile and agent bank accounts have also been opened. The rural post offices have now been turned into agents of mobile financial services in addition to Union Digital Centres providing digital services to the rural population.

Indeed, HPM has already made a commitment that none will remain shelter-less in Bangladesh and the government has taken special move to provide houses to the homeless. The climate adaptation measures have been so much strengthened by the government that Bangladesh was able to ensure safety of millions of coastal population from the onslaught of Amphan, the recently blown deadly cyclone. The whole world has appreciated Prime Minister Sheikh Hasina for her decisive commitment to climate action as demonstrated in responding to the natural disaster pushed by Amphan while the health hazard was in full force. The biodiversity positive approach to agriculture plus saving the mangrove forests including the Sundarbans has been the hallmark of her sustainable development policy stance. The farsighted Delta Plan prepared by her government is yet another spin to her long-term vision of sustainability. No doubt, Bangladesh is well advance in achieving SDGs, particularly those goals related to food and agriculture. Her humane approach to Rohingya problem despite local economic challenges has also brought a lot of international laurels.

Unfortunately, the on-going pandemic has instilled a fear factor in the minds of the entrepreneurs and as well as the people, particularly in the urban areas who have been taken off the hook of regular formal and informal economic activities. Even though the economy is being opened up cautiously, the challenges of infection and deaths remain pretty high. In this context, our thriving rural economy led by agriculture still remains to be the best bet in facing the challenges of pandemic. With growing food production in rural areas and related non-farm activities continued by the farmers and rural entrepreneurs the food price is still stable and the level of consumption remains robust. This has been helping Bangladesh in holding the domestic demand facilitating way out of impending recession as we did during last global financial crisis.

The challenge, however, remains in rebuilding the agricultural supply chains for desired marketing of the farmers’ produces. The government has taken some pro-active measures in continuing procurement of rice and wheat in addition to floating digital open marketing platforms like ‘Food for the Nations’, ‘Paikar.sell’ and other start-ups managed by innovative youths. The government is also going ahead with its planned development of central agricultural processing plant in Purbachal and a number of smaller plants in different parts of the country. With additional support to modernisation and commercialisation of agriculture where the social status of farmers and female labourers will be enhanced, rural MSMEs in the midst of advancement in ICT and physical infrastructures in the rural Bangladesh facilitating both village super markets linked with state of the art e-commerce connectivity and financial support will help Bangladesh move to a new height of sustainable development despite the challenges unleashed by the unknown CODID-19 virus. Since Bangladesh Premier is a ‘Champion of the Earth’ and puts both the ‘people and nature first’ we hope to come out of this unprecedented crisis as victors rather than vanquished. However, for that to happen we must first suppress the virus and win the war imposed by the pandemic. Fortunately, our Prime Minister has been leading the country from the front in this war and the society at large must come forward to strengthen her hands so that we can come out of this crisis with as little damage as possible.

There is certainly scope for improvement in the management of the health sector which is at the centre of attention now. I am sure the leadership will remain focused on both lives and livelihoods aspects of this fight against the pandemic. We, of course, need a war-like mobilisation of all sectors including public, private and non-profit, at this critical hour. We can surely rely on the prudent and compassionate leadership of our HPM who has managed 1998 flood so prudently and many other natural and man-made disasters in the past. And here in comes the role of agriculture which can be our best bet at this hour of national crisis. Tagore said it is not only the responsibility of farmers to develop agriculture. The scientists and the educators must put their hands in it. So said Father of the Nation Bangabandhu, identifying farmers as the most exploited class which needed special policy support. The daughter of Bangabandhu is well aware of the significance of these words of two of our greatest Bengalis. Let her gain strength from our vibrant agriculture to fight this war which has been suddenly imposed on us by the unprecedented pandemic. We pledge to stand by her and make every endeavour to win this war as well. We have strong heritage of fighting spirit as demonstrated in 1971. Bangabandhu also said in September 1974 at the UN General Assembly that his people will win against all odds with their ‘inner-strength’. Surely, we will win this time again.