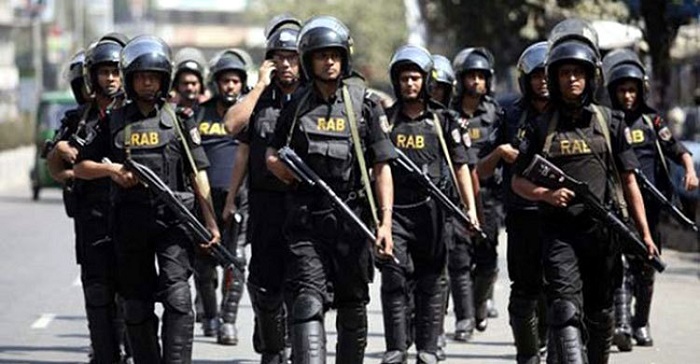 Rapid Action Battalion (RAB) arrested a man with his cohort for allegedly killing his minor son after abduction.

A team of RAB-10 held the father named Zuhas, 31, and his associate Jewel, 20, from Matuail at Jatrabari in the capital on Tuesday night.

Commanding Officer of RAB-10 Md Kaiyumuzzaman Khan briefed this to a group of journalists at RAB media centre in Kawran Bazar of the capital on Wednesday.

The officer said that on June 27, Zulhas lodged a general diary with Jatrabari Police Station, stating anybody kidnapped his three years and seven months of age son Mohammad Mahim; two days later, he complained to the RAB-10 office in this regard.

According to the office, on June 30, the elite force arrested the youth Jewel from Mridhabari area.

During interrogation, he confessed that he and Zulhas kidnapped the minor boy and killed by feeding him (boy) sleeping pill mixing juice.

Later, the RAB held Zulhas from the Darbar Sharif area.

During primary interrogation, Zulhas said he had been demanding Tk four lakh from his father-in-law as dowry for a long aiming to go abroad.

He used to torture his wife for the money.

Finally, after failing to get money, he planned with his neighbour Jewel to kidnap his own son and kill as revenge to his wife.

As per plan, Jewel took the boy to his father at Matuail Bus Stand. From where the boy was taken to a desert place at Demra and killed by feeding eight sleeping tablets mixing juice.

After confirmation of death, they buried the body at Green Model Town.