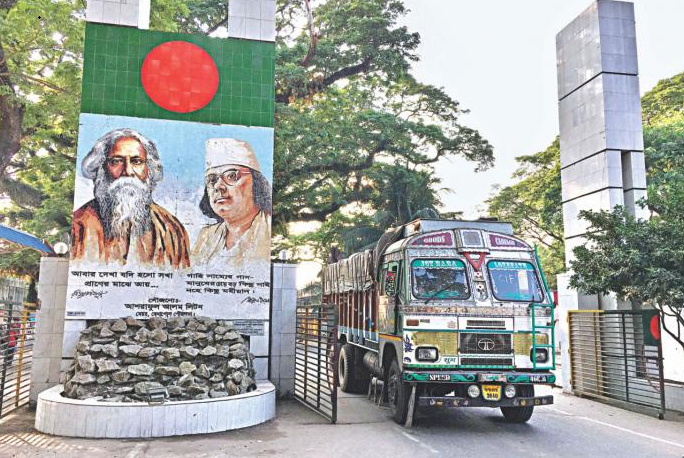 The trading organisations at Benapole land port on Wednesday morning stopped import of Indian goods protesting against the refusal of Bangladeshi export items at Indian side.

As a consequence, the export-import works came to a standstill since then, forcing hundreds of goods laden trucks to wait on both sides of the port.

Amid the worldwide crisis over coronavirus, export-import activities had been suspended at the land port for around three months.

Although Indian goods import resumed at Benapole on June 7, export of Bangladeshi items remains suspended. The Indian government and traders did not allow Bangladeshi goods to enter the country.

Protesting against the incident, clearing and forwarding agent employees at the port declared not to import goods from the neighbouring country in a tit-for-tat move.
Mofizur Rahman Sajan, president of Benapole C&F Agents Association, said the export traders took the decision protesting refusal of their products at Indian side.

“No Indian goods entered the country through the court since 9am,” he added.

Contacted, General Secretary of Petrapole C&F Agents Welfare Association, said they don’t allow Bangladeshi goods to enter the country due to the risk of coronavirus infection.

“It’s up to the Bangladeshi traders whether they will import Indian items or not,” he said, expressing firm stance on their position.

Mamun Kabir Tarafdar, director of Benapole port, said around 500 trucks await at the port for entering India with export items.