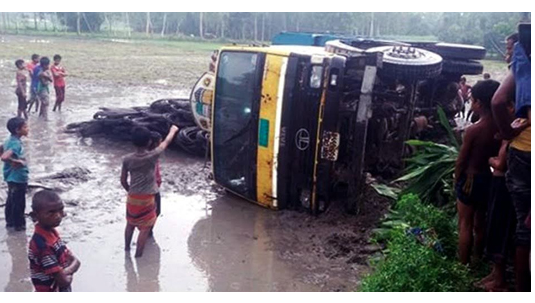 Four transport workers were killed and six others injured in a road accident at Anantapur point on the Taraganj-Burirhat road in Taraganj upazila of the district this noon.

“The accident took place when a rod-laden truck overturned and fell down into a roadside ditch there at 12 noon killing four transport workers on the spot and injuring six others,” Officer-in-Charge (OC) of Taraganj police station Zinnat Ali told BSS.

Being informed, police rushed to the spot, recovered the bodies, rescued the injured persons and sent them to Taraganj Upazila Health Complex (TUHC).

“The deceased are Anil Chandra, 60, of village Dorjipara and Khoyrat Hossain, 55, of Kishoreganj upazila in Nilphamari, Abu Bakar Siddique, 52, and Farhad Hossain, 28, of village Kursha Dolapara in Taraganj upazila of Rangpur,” the OC said.

Four of the injured transport workers were released after providing primary treatments at TUHC and one is undergoing treatment there while the other critically injured worker was sent to Rangpur Medical College Hospital.

“Driver and helper of the truck fled from the scene,” the OC said, adding that police have seized the truck and a case was filed in this connection with Taraganj police station.