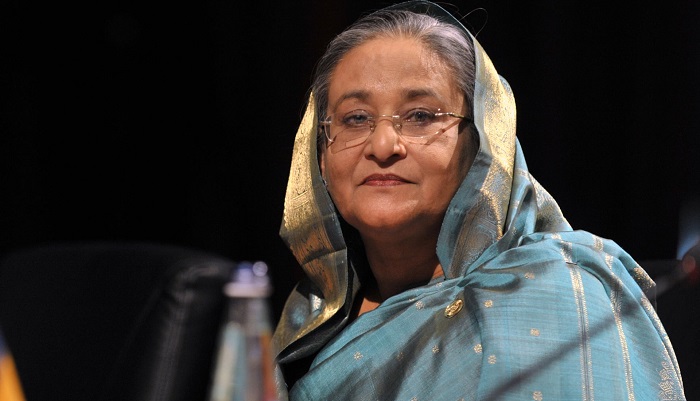 Prime Minister Sheikh Hasina has become a role model for the world leadership by taking various praiseworthy decisions at the international level to fight the ongoing coronavirus pandemic.

Bangladesh has already announced a contribution of $50,000 for the development of safe and effective vaccines, expressing solidarity with global initiative in this regard.

Apart from this contribution, Sheikh Hasina has been working for creating a fund for the South Asian countries to recoup their economic losses caused by the corona pandemic.

Amid the ongoing wave of the corona pandemic, Sheikh Hasina, also the president of the ruling Awami League, had to tackle the post-Amphan situation in the country.

Every move of the Bangladesh premier taken for her country and for the international community has been widely appreciated at home and abroad.

Sheikh Hasina in an article published in the Guardian on June 3 highlighted her government’s measures to handle the two major crises — cyclones and coronavirus.

While addressing a virtual conference titled ‘Enhancing regional cooperation in South Asia to combat corona-related impact on its economies’ of the World Economic Forum, the Bangladesh premier called for forging a collective global partnership and greater unity to fight the corona pandemic.

“The world is perhaps facing the biggest crisis in the last 100 years. So, we need to face the crisis together … We need an approach of collective responsibility and partnership from every society,” she said.

“We do not know how long the pandemic will persist…We need to bring economy, business and society on track; support people to overcome trauma and fear, and revive vital sectors.”

The prestigious US magazine Forbes has also highly praised Sheikh Hasina and placed her in the list of successful women leadership for her sincere efforts to contain the corona crisis in Bangladesh.

The article said Sheikh Hasina harnessed tech, installing screening devices across international airports which screened some 650,000 people (of which 37,000 were immediately quarantined), something the UK still isn’t doing.

“Bangladesh, a country of some 161 million people, led by Sheikh Hasina, is no stranger to crises. She was quick off her feet standing up to this one, with a response the World Economic Forum called ‘admirable’,” Avivah Wittenberg-Cox, a contributor of the Forbes, wrote in an article in the magazine on April 22.

After the first corona case was detected in early March, the Bangladesh premier closed educational institutions and nudged all non-essential businesses to go online, it said.

Prime Minister Sheikh Hasina also called for ‘rapid invention’ of newer vaccines to protect mankind from the pandemic like coronavirus (Covid-19), saying that vaccination has proved to be one of the most important means to fight contagious diseases.

“The Covid -19 pandemic has proved how powerless we are in the face of any global calamity. It also reminded us of the old saying that prevention is always better than cure,” she told the virtual Global Vaccine Summit 2020 being held in the UK.

Citing the United Nations, Sheikh Hasina said one new infectious disease emerges in humans every four months and the Global Virome Project estimated that there are about 7 hundred thousand viruses which are capable of causing pandemics.

“Many of them may pose an existential threat to the whole human race. So, the current and newer vaccines will be needed for the survival of the humans,” she said.

The premier also said vaccination has proved to be one of the most important means to combat infectious diseases.

In her first proposal, Sheikh Hasina said the world will need new thinking on human well-being, tackling inequality, supporting poor and getting back our economies to pre-Covid levels as poverty and inequality within and among societies will increase rapidly due to the pandemic.

“In last one decade, we lifted half of our poor out of poverty. Many of them may now slide back. So, the world will need new thinking on human well-being, tackling inequality, supporting poor and getting back our economies to pre-Covid levels,” she said.

She commended founder and Executive Chairman of The World Economic Forum Prof Klaus Schwab for identifying “infectious diseases” as a major risk in the 2020 Global Risks Report.

“So, the Forum and UN should mobilise and lead governments and global businesses on focused policy discourse,” she opined and expressed her eagerness to join any such initiative.

In the third proposal, the premier called for devising strategies and practical support measures as the world is currently witnessing transformation in global businesses.

“We need to devise strategies and practical support measures so that countries like Bangladesh can adapt to these measures,” she continued.

In her fourth proposal, Sheikh Hasina said a meaningful global strategy should be adopted to share the burden and responsibilities for the migrant workers.

“Migrant workers are passing a very difficult situation, including joblessness that is also risking South Asian economies. So, we need a meaningful global strategy to share the burden and responsibilities,” she said.

In the fifth proposal, Sheikh Hasina called for developing innovative solutions in various sectors to better prepare for the future.

“During this pandemic, we’ve effectively used some digital tools and technologies, like artificial intelligence and mobile phones to trace infections. So, to better prepare for the future, we can fast develop innovative solutions in various sectors,” she said.

About Bangladesh’s contribution of $50,000 in development of safe and effective vaccines, a foreign ministry official said Bangladesh extended the support as Prime Minister Sheikh Hasina remains focused on the front of the unprecedented coronavirus crisis.

Global Citizen is a social action platform which aims to solve the world’s biggest challenges.

The activists of the platform believe that they can end extreme poverty because of the collective actions of Global Citizens across the world.

Foreign Minister Dr AK Abdul Momen made the announcement for the mission of ‘Global Goal: Unite for Our Future’, in a video message on Saturday.

“We’re pleased to announce a contribution of $50,000 to share our solidarity with this initiative of supporting the development and availability of safe and effective vaccines,” he said.

Dr Momen said this announcement is more importantly for equitable access to healthcare and to combat the proportionate impacts of Covid-19 on the marginalised communities.

He said Prime Minister Sheikh Hasina remains focused on the front of the unprecedented crisis.

“We shall continue to remain true to our international obligations while anticipating responsible conduct from our relevant partners in mitigating these shocks,” he added.