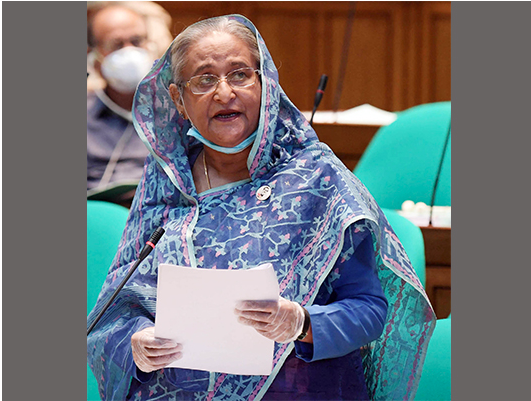 Prime Minister Sheikh Hasina today said her government was determined to implement the national budget for the coming 2020-21 fiscal despite the coronavirus hurdles as many analysts feared it could be a tough job because of continued COVID-19 onslaughts.

“We have never failed to implement budgets and we will also not fail in the future as well,” she said while taking part in the general discussion on the budget as the Leader of the House in the eighth session of the eleventh parliament.

The premier said many people described the budget to be “highly-ambitious” while she was aware of the challenges which the government was likely to face in implementing the budgetary proposals amid the COVID-19 crisis that virtually halted the global economy.

She said her government would make its way ahead towards building the “Sonar Bangla” free from poverty-and-hunger as dreamt by Father of the Nation Bangabandhu Sheikh Mujibur Rahman while the implementation of the Taka 5.68 lakh crore “balanced budget” would be part of that endeavour.

“I personally believe a proper plan and due courage will make it possible . . . frustration never hold us back,” Sheikh Hasina said.

The premier said her government always goes ahead with a goal and specific work plan “but at times we have to reset the plan considering the situation and necessity as well”.

But, the prime minister expressed her firm determination that Bangladesh would once again join the journey towards the development by offsetting the economic impact of the global pandemic as she said, “We have a very strong socio-economic position in the world.”

Bangladesh has been approaching ahead with a vision of making the country a happy and prosperous one although it is currently facing the global pandemic, she said, adding that “Bangladesh would go ahead towards the developments by overcoming all the hurdles and it is currently doing so.”