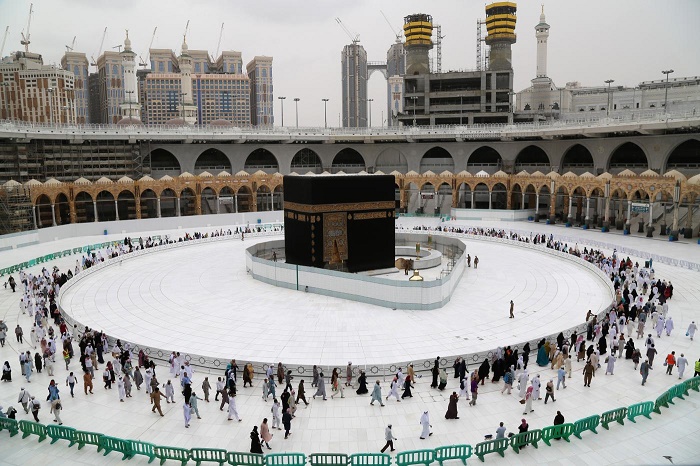 The year 2020 will be remembered in Islamic history as the year of pandemic. Despite the fact that traversing the land has become so convenient in the 21st century, thousands of people will not be able to fly to Mecca to perform the pilgrimage this year because of COVID-19. Citing the Hajj ministry, the official Saudi Press Agency said, "It has been decided to hold the pilgrimage this year with very limited numbers.

While an estimated two million people were expected to visit Mecca and Media this July, only less than 1000 are expected to perform Hajj in 2020. However, there is a sigh of relief in the Muslim community as many of them feared that Hajj may be canceled altogether this year. This is the first time in Saudi Arabia's nearly 90-year history that foreign visitors have been banned from performing Hajj. While it is true that in the past Hajj had been cancelled because of war and past epidemics but something like this had not happened since the founding of the Kingdom of Saudi Arabia in September 23, 1932.

A total of 127,198 pilgrims from Bangladesh had performed Hajj last year.  Earlier on February 24, the Cabinet approved the draft Hajj Package-2020, fixing the minimum cost for an intending pilgrim at Tk 3.15 lakh under package-3 managed by the government. According to the Religious Affairs Ministry, 63,594 Bangladeshis registered to go to Saudi Arabia to perform Hajj this year -- 3,457 under government and 61,594 under non-government management. However, after the coronavirus outbreak in the country and the subsequent preventive measures, new decisions were sought.

Our neighbouring country India also made similar statements. Union Minority Affairs Minister Mukhtar Abbas Naqvi said that the government had received 2,13,000 applications for this year’s Hajj. But because of the pandemic, the government there had said that no pilgrims from India will travel to India for Hajj this year. He added that the process to refund the full amount of money deposited by the applicants for Haj has been started immediately without any deduction.

Earlier in June, the world's most populous Muslim nation Indonesia made the decision to withdraw from the pilgrimage. Malaysia, Senegal and Singapore followed Indonesia with similar announcements.

Since late February, the Kingdom of Saudi Arabia had suspended the Umrah pilgrimage to Mecca because of coronavirus outbreak. The kingdom has one of the highest rates of coronavirus infections in the Middle East, with more than 167,000 total confirmed cases and 1,387 deaths. About 113,000 had recovered.

Pilgrimage was introduced from the time of Prophet Ibrahim (am) according to Islamic scholars.

‘Umrah of Dhu'l-Qada ‘(Pilgrimage of the 11th month) was the first pilgrimage that Prophet Muhammad (sm)and the Muslims made after the Migration to Medina to Mecca. It took place on the morning of the fourth day of Dhu al-Qi'dah 7 AH ( year 629). The entire event was three days long. The Prophet (sm) ordered his people, and the men who witnessed Al-Hudaibiyah Truce Treaty in particular, to make preparations to perform the lesser pilgrimage. He proceeded with 2000 men besides some women and children and 60 camels for sacrifice, to visit the Holy Kaaba in Mecca. The Muslims took their weapons with them fearing the treachery of the Quraishites, but left them with a party of two hundred men at a place some eight miles from Makkah.

Better transport system by road, waterways and air had made it easier to visit Saudi Arabia for Hajj over the years. According to the data in the book “British Colonial Knowledge and the Hajj in the Age of Empire” by John Slight pilgrim numbers mushroomed from approximately 100,000 in the 1830s to around 300,000 in the 1890s.