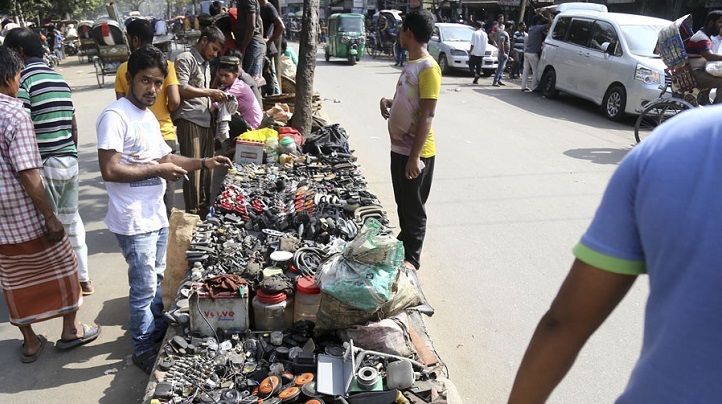 Automobile traders urged to provide tax exemption on import of expire parts for next one year to overcome challenges in the vehicle assembling sector.

Businessmen discussed on present scenario of automobile sector in the country and projected the future of business of two-wheeler, three-wheeler, bus, truck and pick-up in the country.

“However, its matter of concern that a group of businessmen boarded imported ‘light truck’ from India and China and registered in ‘pick-up category. It’s an ultimate violation of law. Government should take step to stop such activities and BRTA should clarify the definition of pick-up category,” Matlub Ahmed added.

Regarding the importance of motor cycle, Runner Automobiles Chairman Hafizur Rahman Khan said the local manufactures have invested Tk 80 billion to flourish the market and fulfilled 80 percent of local demand.

Motorcycle manufacturers contributed on average Tk 10 billion to government exchequer per year, according to the seasoned businessman.

He said that around 1.4 million three wheelers (known as CNG Auto Rickshaw) are moving across the country though 90 percent of them are illegally registered.

Hafizur urged the government to open registration for three wheelers to increased revenue to Tk 20 billion from the sector.

Ifad Motors Managing Director Taskeen Ahmed highlighted importance of commercial trucks to support all businesses in logistic sector while the businesses contributed to the national economy worth of Tk 25 billion from import of vehicle.

Rangs Motors Managing Director Sohana Rouf Chowdhury said there are 60 thousand buses on roads while around 3 million of people ride on bus for transformation.

She also mentioned that traffic gridlock ‘can be reduced’ through promoting the light engineering sector and expansion of assembling of passenger bus.