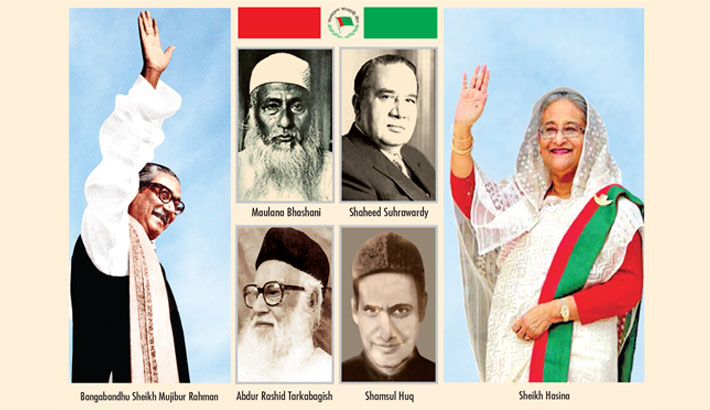 Bangladesh Awami League, an inseparable part of the Bengali nation, steps into its 72nd year today by overcoming various hurdles during the party’s long glorious journey.

Starting its journey from the historic Rose Garden in the Old City of Dhaka on June 23 in 1949, Awami League led the country’s war of independence in 1971 and played a strong role in all democratic movements during Pakistan and later in Bangladesh.

Awami League, one of the country’s oldest political parties, will celebrate its founding anniversary digitally this year due to the ongoing wave of the coronavirus pandemic.

In its 71-year history, the party also led the 1952 Language Movement and fought successfully against exploitation, disparity and violation of basic human rights with a massive public support.

Moulana Abdul Hamid Khan Bhasani and Shamsul Huq were unanimously elected president and general secretary respectively of the new political party that emerged as a rival of then ruling Muslim League.

Sheikh Mujibur Rahman came to the leadership of the party through the 1966 council session and became the unparallel and undisputed leader of Bengali nation.

After the Liberation War in 1971, Father of the Nation Bangabandhu Sheikh Mujibur Rahman started work to build Bangladesh as a non-communal and prosperous country.

Under the dynamic leadership of Prime Minister Sheikh Hasina, the government sets a target to turn the country into a peaceful abode in South Asia by establishing good governance and carrying out balanced development.

On the eve of the party’s founding anniversary, Awami League president and Prime Minister Sheikh Hasina in a message greeted people as well as leaders and activists of the party.

“We’ll turn Bangladesh into a middle-income country by 2021 and developed one before 2041, In Shal Allah. We’ll be able to celebrate the golden jubilee of the country’s independence in 2021,” Sheikh Hasina said.

“Awami League has a glorious role in every major achievement of the Bengali nation. We’re now standing with our head high in the world as a self-respecting country under the Awami League government. In future Awami League along with the people will build a poverty-free and prosperous Bangladesh as envisioned by the Father of the Nation,” she added.

To mark the day, Awami League will hoist national and party flags at its all offices across the country.

Party leaders and activists will place wreaths at the portrait of Father of the Nation Bangabandhu Sheikh Mujibur Rahman on the premises of Bangabandhu Bhaban at Dhanmondi in the morning.

Besides, a party delegation will go to Tungipara in Gopalganj for paying homage to Bangabandhu.

Several webinars and meetings will also be arranged through social network websites on the occasion of the party’s founding anniversary.