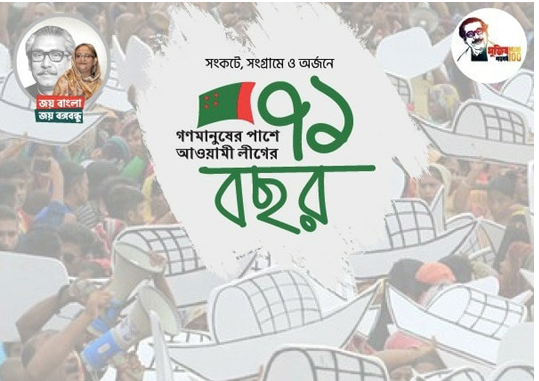 The 71st founding anniversary of Bangladesh Awami League, the party which spearheaded the country’s 1971 Liberation War, will be observed on Tuesday particularly on virtual media due to the coronavirus pandemic.

To mark the day, a webinar on ‘Youth Expectations from Bangladesh Awami League’ will be held tonight which can be watched live from 8:30pm on the party’s official facebook page (https://www.facebook.com/awamileague.1949/) and youtube channel (https://www.youtube.com/user/myalbd), said a press release.

It will also be aired on private run Somoy television and Bijoy TV as well as the official facebook pages of leading national dailies including Ittefaq and Samakal and online portal bdnews24.com.

Bangladesh Awami League was formed on 23rd June in 1949 at Dhaka’s Rose Garden by a group of farsighted leaders of the then East Bengal.

Since then the party regulated the course of the country’s history of liberation, led the struggles for realizing people’s rights and liberated the country from the clutches of Pakistani occupational forces.

During the pre-liberation movements and struggles, Bangabandhu Sheikh Mujibur Rahman, the architect of independent Bangladesh and the Father of the Nation, was the youngest leader of Awami League.

When he became the President of Awami League, he chose young activists to work with him.

Throughout the history of Bangladesh, Awami League has been led by young politicians with bright minds and revolutionary ideas as well as experienced and seasoned politicians.

In 1981, when Sheikh Hasina, daughter of Bangabandhu, returned home from exile and took up the helm of the party’s leadership, she was also the youngest among other leaders.

Sheikh Hasina, with the help of her party men, strengthened Bangladesh’s economy and state system. With young leaders on her side, she had to endure oppression of the opposition and now leading Bangladesh towards Vision 2041.

On its 71st anniversary, AL wants to continue its regular interaction with youths and understand their expectations from these veterans, the release said.