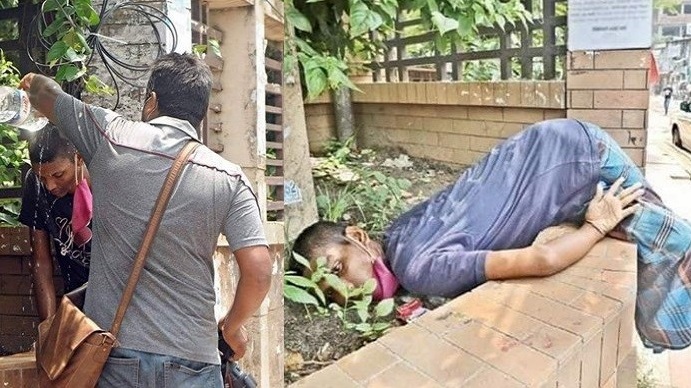 At least 37 unfortunate people across the country fell victim to deliberate cruelty and neglect as the members of their families abandoned them in the wilderness or on the roadside suspecting them to be infected with coronavirus.

Such cruel incidents took place across the country during the last three months since the first corona case was detected on March 08, according to a data of Centre for Genocide Studies of Dhaka University.

Deep-seated irrational fears over the coronavirus and lack of moral and religious values have forced them to show inhuman behavior, experts said.

Case 1: Sexagenarian Belal Hossain of Sherpur upazila in Bogura district was suffering from fever for two days. His wife Anowara Begum and their sons suspected him to be infected with coronavirus. On June 17, Anowara along with their children forcibly took Belal out of their home and left along a road when it was raining heavily. The neighboring people just witnessed the incident but did nothing to protect helpless Belal from such inhuman behavior. Having no option, seriously sick Belal began to wet in the rain. Later, on information, Sherpur police rescued the Belal and sent him to the upazila health complex for treatment.

Humayun Kabir, officer-in-charge of Sherpur Police Station, said: “It is an cruel and heartbreaking incident. One may suffer from coronavirus, but it does not mean he or she will be thrown out of home or abandoned by family members.”

Case 2: Monowara Begum Monira, 50, a resident of the capital’s Mirpur Commerce College area, was suffering from breathing problem on June 4. On that day, Mozammel Sarkar, son of the woman, took her to Dhaka Medical College Hospital and left her in front of the hospital gate.

The critically ill woman passed two days there. On June 6, police rescued her and got admitted in the hospital.

When contacted, Dr Shahnila Ferdousi, director (disease control) of Directorate General of Health Services, told the daily sun that such inhuman act should not take place in any civilised society.

“The infection of coronavirus does not mean certain death. In our country only 1.03% percent coronavirus infected people died,” she said.

She said if any member of a family has corona symptoms, he or she should be taken to hospital immediately.

Prof Dr Syed Manzoorul Islam, chairman of Centre for Advance Research in Humanity of Dhaka University, told the daily sun that it is not a matter of fear over coronavirus.

“Will the virus go away if one, infected with Covid-19, is removed from his or her house? Of course not! It is a matter of cultural psychology,” he said.

“We have lack of moral and religious education. Otherwise, how can it be possible for a son to dump his mother in front of a hospital?” he questioned.

He emphasized the moral and religious education to refrain people from committing such inhuman act.