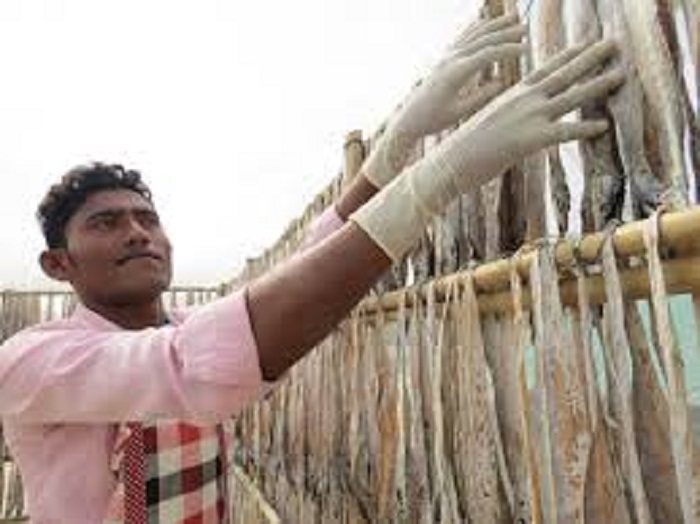 Those were very busy days last year for dry fish labourer Mamtaz Begum when she used to work to dry fish from dawn to dusk.

“I used to wake up early in the morning every day in May last year. I worked at a dry fish unit in Cox’s Bazar until the sun set without any break,” said Mamtaz, a mother of three.

But this year, she said, the dry fish labourers sat idle in the peak season – April and May – as coronavirus (COVID-19) pandemic forced them to stay home and the owners to shut their fish drying units.

“We had no work in the peak production period this year. Besides, we also have to sit idle during the monsoon, which will intensify our plights,” Mamtaz added.

There are around 50 dry fish villages in the coastal districts – Cox’s Bazar, Khulna and Satkhira – where over one lakh people are directly involved in the sector.

NO SUNLIGHT, NO WORK

The dry fish labourers usually do not have enough work during the monsoon from June to August. That is why they have to meet their family expenses during the period from their savings or taking money as advance from the fish processing unit owners.

“Last year, I borrowed Taka 6,000 from a dry fish unit owner with a condition to repay the money this season. I am yet to repay the whole amount as I have no work now,” said Mamtaz, working in Najirartek dry fish village in Cox’s Bazar.

Mamtaz and her 12-year-old son are the only breadwinners of her family as her husband is unable to work due to illness, while she earns Taka 300 to Taka 350 daily by working in the dry fish units.

But, during the last two months, they had no work in Najirartek dry fish village due to coronavirus pandemic. So, Mamtaz has met her family expenses from savings or borrowing from the neighbours. That is why she is very concerned about the future as they have to sit idle during the monsoon. But currently she has no money in hands.

“I have to take advance money from the fish unit owners again although it will create a huge burden on me in the next season,” she added.

“I took Taka 5,000 from a dry fish unit owner last year, but I could not repay the money as coronavirus outbreak hits our livelihood hard.” said Rehana Akter, another female dry fish labourer.

Rehana has been sitting idle for more two months but she had to arrange food for her five minor children. “My husband died suddenly a few years ago. And my children are too little to earn,” she said.

Labourer Md Alam said her five-member family had faced financial crisis due to the countrywide shutdown over COVID-19 and he fears very gloomy days in the monsoon.

Atikullah Sawdagor, the president of the Najirartek Dry Fish Traders Cooperative Society, said they produce most of the dry fish during in the last few months of the season.

“But, this year the dry fish production dropped at almost zero level for the want of fish since as the fishermen were afraid of going to sea to catch fish amid coronavirus pandemic. We also faced transportation crisis to bring fish from Chattogram,” he added.

He said the Najirartek dry fish village has incurred a loss of about Taka 100 crore in the outgoing season.

Around 30,000 workers, with two-thirds women, work in 1,040 dried fish processing units in the Najirartek dry fish village and most of them work on daily wage basis, he said.

“Around 15 to 20 people work in my unit. Among them, I hired six workers for the whole season. I had to pay wages to them though there was no work in the last two months,” he added.

Hoq said he earlier took Taka five lakh from the Ekram and Brothers, a dried fish merchant of the Chattogram Asadganj market, with a condition to supply 50,000 kg of dry fish this season.

“But I couldn’t meet the target. So, I fell into a debt trap,” he added.

Md Shah Ekram, proprietor of the Ekram and Brothers, said he also incurred a huge loss this year as the producers did not supply their dry fish as per expectation.

“Due to lockdown, most of the producers failed to supply fish. However, the season is over…probably we will not be able to meet the production target,” he added.

“Dry fish traders and producers can take the advantage of the stimulus package. The Fisheries Department is also taking necessary measures to provide support for the dry fish workers,” she added.

Dry fish is an important item in the diet of the country’s people. It accounts for the fourth largest share of fish consumed and is the most accessible type of fish for consumers. The dry fish is very popular in the country’s some regions as people love to eat it.