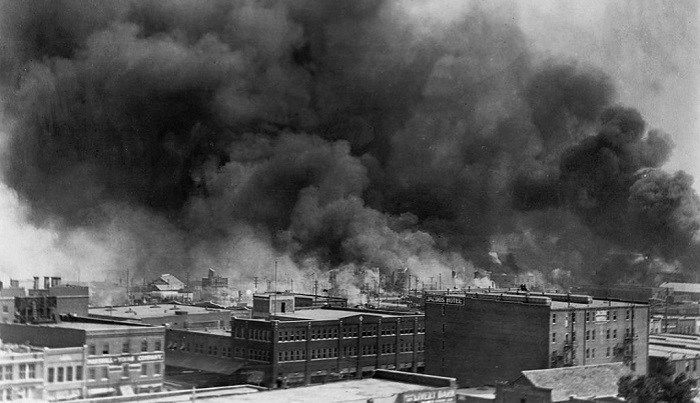 Tulsa bears the scars of a racial massacre in 1921 that left up to 300 blacks dead, 1,200 buildings burned to the ground and none of the white rioters that committed the violence ever charged.

It started when a young black shoeshiner was accused of assaulting a white woman working as an elevator operator.

As newspapers jumped on the story and rumors spread, the white community in the Oklahoma city became enraged. Hundreds of whites demanding justice gathered outside the courthouse where the black suspect was being held.

Black men, some of them armed veterans of World War I, feared he would be lynched and raced to the courthouse to intervene.

Shots were fired, and bedlam broke out as white mobs attacked the black neighborhood known as Greenwood on May 31 to June 1, 1921.

"Some type of confrontation between blacks and whites was inevitable because of racism that existed because of the presence of Ku Klux Klan members that were part of our local city government, that were on the rosters of the police department and fire department," said Michelle Brown, program coordinator of the Greenwood Cultural Center. An exhibit there commemorates the massacre.

A commission of inquiry formed in 2001 concluded that local authorities armed some white people and named them police deputies and that they added to the violence rather than curb it.

A night of bloodshed ensued as gunfire rang out from both sides, black-owned stores were looted and torched, and homes of black families were shot up.

Many accounts say planes piloted by white men dropped incendiary bobs on Greenwood, which was known at the time as the Black Wall Street because it was one of the most prosperous African-American communities in America. For whites it was a source of envy and jealousy.

The chaos lasted 24 hours and ended only when the National Guard arrived in Tulsa. One of the first things it did was lock up 6,000 black people in internment camps.

At the exhibit on the massacre at the cultural center, there are photos of all the death and destruction.

"There are about 15 or 20 of these photographs that were taken by white photographers that were used as postcards and were sent around the country because many of them were proud of what they had accomplished," said Brown.

The exact number of blacks killed in the massacre is not known because many bodies were thrown into a river, burned or buried in mass graves.