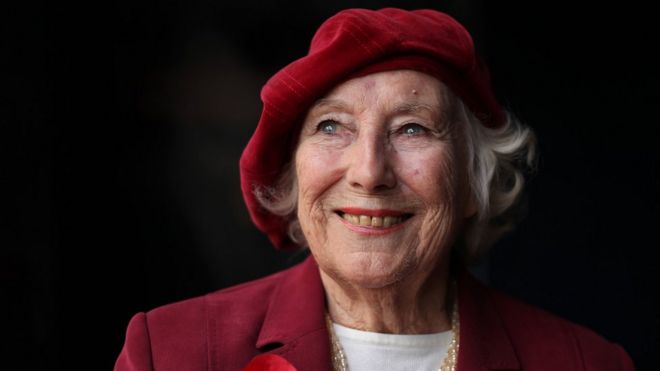 The singer was best known for performing hits such as We'll Meet Again to troops on the front line in countries including India and Egypt.

Her family said they were "deeply saddened to announce the passing of one of Britain's best-loved entertainers".

In a statement, they confirmed she died on Thursday morning surrounded by her close relatives.

Information on a memorial will be announced at a later date.

Six weeks ago, ahead of the 75th anniversary of VE Day and during the height of the coronavirus pandemic, Dame Vera said simple acts of bravery and sacrifice still define our nation.

A week later, she became the oldest artist to get a top 40 album in the UK, beating her own record when her greatest hits album re-entered the charts at number 30.

Dame Vera, who had sold more than a million records by the age of 22, was also remembered for singing The White Cliffs Of Dover, There'll Always Be An England, I'll Be Seeing You, Wishing and If Only I Had Wings.

Her wartime classic We'll Meet Again was referenced by the Queen in April during a speech to Britons who were separated from families and friends during the coronavirus lockdown.

The late singer's daughter, Virginia Lewis-Jones, said she was proud of the difference her mother made through her charity work.

She said the Dame Vera Lynn Children's Charity, which her mother founded to help young children with cerebral palsy, "always held a very special place in her heart".

Born in London's East Ham in 1917, Dame Vera's singing talent was discovered at a young age and by age 11 she had left school to pursue a full-time career as a dancer and singer.

In 1939, in poll by the Daily Express, she was voted by servicemen as their favourite entertainer - gaining her the Forces' Sweetheart nickname.

Paying tribute, Prime Minister Boris Johnson said the singer's "charm and magical voice entranced and uplifted our country in some of our darkest hours".

"Her voice will live on to lift the hearts of generations to come," he said.

Labour leader Sir Keir Starmer said: "Her songs still speak to the nation in 2020 just as they did in 1940."

BBC One will air a tribute programme at 19:30 on Thursday, the broadcaster confirmed.

WW2 veteran Sir Tom Moore, who raised more than £32m for NHS charities during the height of the coronavirus pandemic in April, said: "I really thought Vera Lynn would live longer, she's been speaking so well on TV recently. She had a huge impact on me in Burma and remained important to me throughout my life."

The Royal British Legion described her as "an unforgettable British icon" and a "symbol of hope to the Armed Forces community past and present".

Speaker of the House of Commons Lindsay Hoyle said she was a "hero" who captured the "sense of longing felt by so many during our darkest hour", while Defence Secretary Ben Wallace said she "lifted our nation and its Armed Forces in their moment of maximum peril".