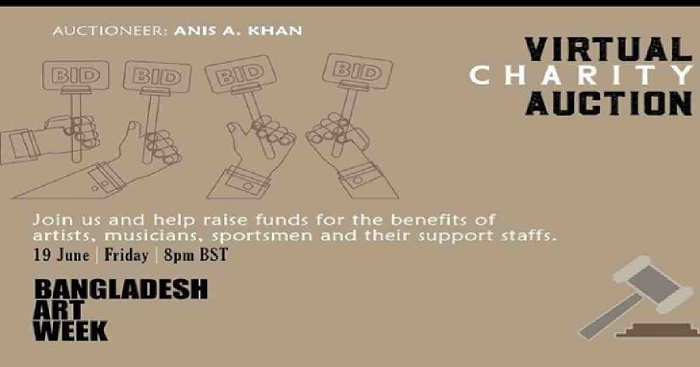 The auction will be held online on Friday (June 19) at 8pm Bangladesh Standard Time (BdST) and will be conducted by eminent senior banker Anis A Khan, who is also a keen art enthusiast and patron, said a press release.

Indonesian Ambassador to Bangladesh Rina P Soemarno Yuwono has also donated one of her artworks for the good cause.

Also included are sports memorabilia like a cricket bat autographed by all the captains of the ICC World Cup 2019, which has been donated by the former captain of the Bangladesh cricket team Akram Khan, a T-Shirt autographed by legendary West Indian cricketer Brian Lara during his last series against Bangladesh and donated by another former captain Habibul Bashar Sumon.

Sumon has also donated a jersey from the first ever test winning XI in 2005 for Bangladesh, bearing his and his team’s autographs and with the score sheet printed on it, making it a unique part of our cricket heritage.

This jersey is signed by the whole team. There will also be memorabilia from the musical world, like a 40-year-old historic bass guitar, donated by co-founder of BAW Mohammed Mohsin and two vinyl records signed by the great singer Lionel Richie and Billy Joel donated by Razwanur Rahman. Guests from all walks of life are invited to participate in the online auction and place their bids.

Founder of Bangladesh Art Week Niharika Momtaz said, “As it is a unique virtual charity auction for a great cause, it has already created a great enthusiasm, globally. The Bangladeshi community and a number of non-resident Bangladeshis have also shown keen interest to participate.”

Co-founder Mohammed Mohsin mentioned that already 369,000 posts and 158,000 video views have been made this week on our online Facebook page.

Anis A Khan, the auctioneer, said that he was feeling very excited about the endeavour launched by Niharika and Mohsin and was looking forward to a most successful auction, resulting in much needed support to the affected artists.