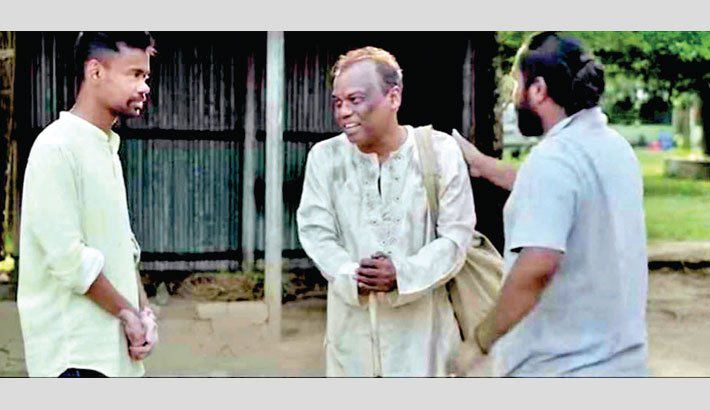 A scene from ‘Extra Artist’

Popular actor Fazlur Rahman Babu is getting huge response for his telefilm ‘Extra Artist’. The much talked about telefilm was released on the occasion of the Eid-ul-Fitr on Dhruba TV. Viewers of the telefilm are increasing day by day thanks to Fazlur Rahman Babu’s outstanding performance in the film.

The telefilm made based on a true story was released on June 1.  About six lakh viewers enjoyed the telefilm till June 17.

In the telefilm, Babu played the role of an extra artist named Monwar. Story of the telefilm revolves around him. The script of the film has been written by Ishtiaque Ahmed Rumel while Tanvir Ahmed has directed it.

Talking about the film, Babu said, “Audience always want to watch films good story. I have realised it after the release of my new telefilm ‘Extra Artist’. I am getting huge positive response for the telefilm. Though its director was newcomer but we tried our level best to portray our characters according to the story.”

Babu, who won the hearts of millions by his fabulous performance, started his acting career in 1978 when he joined the theatre group Baishakhi Natya Ghosthi in Faridpur. That same year, Babu acted for first time in a national drama festival.

He started his television acting career in the soap opera ‘Mrittu Khuda’ (1991), produced by Abu Zafar Siddiqui, on Bangladesh Television (BTV). However, it was his role of Poran Majhi television drama Itikatha (1991), written by Rashid, that secured him further roles in dramas such as Shundari and Danab. Babu also acted with Bengali film Daruchini Dip directed by Tauquir Ahmed while Humayun Ahmed was story, dialogue and scriptwriter.

Babu has become popular for his humorous characters but his early career in stage dramas like Danab and Jay Jayanti was in serious roles.

Babu continued to work for television and theatre simultaneously until 2000 when he stopped theatre work as television took nearly twenty-five days per month. Babu made his theatrical film début with Abdullah al Mamun's Bihanga between 2000

He won Bangladesh National Film Award for Best Supporting Actor twice for his roles in the films ‘Shonkhonaad’ (2004) and ‘Meyeti Ekhon Kothay Jabe’ (2016). He has also been featured in an Indian film.