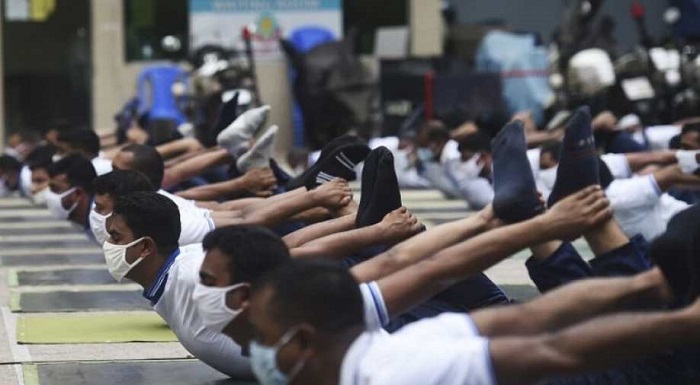 Dhaka Metropolitan Police’s (DMP) Diplomatic Security Division has introduced yoga course for its personnel’s stress relief, with officials concerned saying 300 policemen by now completed the training sessions as the course was underway to incorporate the rest of members of the unit.

“We launched the yoga training programme for the unit personnel on June 7,” DMP’s deputy commissioner for the chancery division Ashraful Islam told journalists.

Ashraf, himself an yogi, said by now 300 members of his unit went through the yoga training in four courses while rests were expected to undergo the coming sessions as the initiative was aimed to turn all 1,000 policemen in the zone as yoga practitioners.

The officer said he took the initiative to keep up the spirit, moral and stamina of the men under his command, relieving their stresses particularly during the COVID-19 crisis.

He said the policemen took it as an indoor sport which yielded encouraging results to boost their mental health alongside physical fitness enabling them to fight back frustrations or fears of being infected by the virus.

Ashraf said until the introduction of the yoga course, a number of policemen were suffering from insomnia and aversion to food amid fears that the COVID-19 could infect them or their family members anytime which affected their life in the barrack, own house and in discharge of their duties as well.

“The yoga encouraged them to do their jobs in cheerful mind now,” he said.

“The mental strength is very important for all at the moment . . The whole world is now facing a tough situation while awaiting a vaccine to prevent the coronavirus,” he said.

Abdullah suggested everyone to practice meditation, offer prayers and practice physical exercises for physical and mental fitness to prevent other ailments as well as the pandemic gripped the country as every part of the globe.

Police headquarters spokesman AKM Kamrul Ahsan told journalists that coronavirus so far killed 27 policemen across the country and infected 7,000 others as they were on duty.

“As of today 4,000 of the personnel recovered and many of them rejoined their duty as well,” he said.