Locust Panic No More in Bangladesh 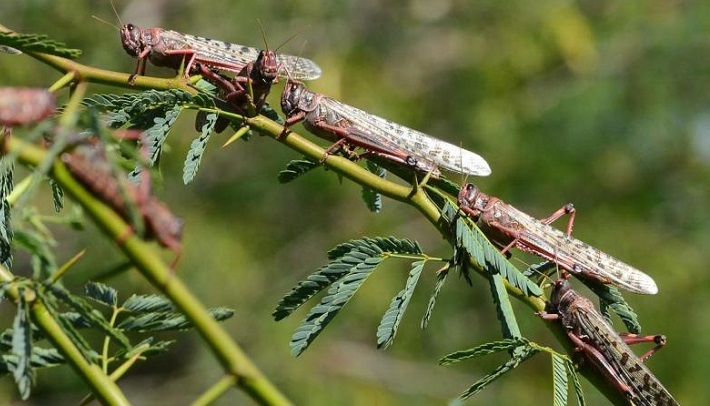 COVID-19 pandemic could now be fusing into a hunger pandemic - apprehend WFP. Bangladesh is now fighting to ensure food security of her huge population under uncertain lockdown situation. Just then, it was like a ‘steep blow on the die’ – the Amphan and the Locust. Amphan damaged about 2 lakh hectares of crop land and in terms of money it was more than thousands crore taka but good news is rice production was not affected that much. By this time, we achieved production target even more than our expectation. Now the recent concern of agriculture sector is the probable noxious locust outbreak in the country.

Swarms of locusts have first invaded vast swathes of land in India since April this year. They entered several districts of Rajasthan via Pakistan’s Sindh Province. Few days later, they entered the neighbouring State of Madhya Pradesh. Many districts in Uttar Pradesh have now been put in alert. The locust attack has affected about 90,000 hectares across 20 districts in Rajasthan. Favourable rain-bearing winds aided their transport towards India. This quickly growing swarm is now threatening to amplify into an agrarian disaster (FAO, 10 June 2020).

During the last few months, there has been a host of analytical articles in the Indian press about the latest locust swarming from the Rajasthan/Gujarat desert region, all the way into Madhya Pradesh and Chhattisgarh, causing extensive damage to the crops. ‘The Hindu’ one of the leading dailies of India published a scary anecdote that it will cross the border soon and attack the Bangladeshi field during the summer season. Even they forecast locust will fly over the Indian Ocean and land in peninsulas and heading towards Bangladesh. Commissioning that news, on 25th March some of Bangladeshi media took the issue very seriously and broadcasted alarming news about probable locust outbreak in Bangladesh.

On April 18, swarms of locust like insects were seen in Teknaf upazila of Cox's Bazar which has made the fright established concerns over locust attack in the country. The news really frightened us as food security is already a major concern during the corona pandemic across Bangladesh and the globe. Meanwhile, the arrival of locusts in our country was certainly panicky news. The government immediately sent a team of experts, comprising of plant protection experts, entomologists and agricultural scientists to Teknaf to identify the species of the insects. After investigation, experts said the insects were a kind of grasshopper, Aularches miliaris, belonging to the family of Pyrgomorphidae. It is also called 'spotted coffee grasshoppers.' The insect is early reported in Bangladesh by Alam (1967). That was a conclusive report for the anxious concern authorities who were really in a deep tension on the panicky news. With these consequences Bangladesh Agricultural Research Council (BARC) arranged a discussion meeting on 04 June 2020 at BARC conference room about ‘Locust Outbreak and Management’. In the meeting some of the experts opined that locust found in Chhattisgarh, India which is near to Bangladesh. So, there is a chance of locust migration in Bangladesh if weather is favourable. By this time, many opinions seemed to spread differently, but none is clear about migration to Bangladesh and made ambiguity.

To make it clear, Ministry of Agriculture took refuge to the locust expert of FAO head quarter, Rome through Dhaka office. On June 11, 2020 FAO arranged a comprehensive discussion session through video conferencing where more than 140 renowned entomologists from different research organisations including MoA, BARC, BRRI, BARI, BINA, DAE, Universities and experts and senior officials from home and abroad were connected  to the webinar. I am lucky enough to remain connected in the session.

In the webinar Dr. Keith said, desert locust arrival in Bangladesh is very unlikely. He mentioned that the locust may migrate along the border areas of Pakistan and India by June of this year but not beyond that. So, Bangladesh is safe.  The desert locust is considered the most destructive migratory pest in the world. A desert locust lives for about 3 months (2 week for eggs to hatch, 6 weeks for hatching to fledging i.e., hoppers to become adult, 4 weeks for adults to become mature and lay eggs). There is an exponential increase in locust number with every new generation of breeding-20 times after 3 months, 400 times after 6 months and 8,000 times after 9 months. Swarms fly during the day; carried in the same direction the wind is blowing, they can migrate as far as 150km/day. Immature swarms fly the farthest. A desert locust lives up to 3 months if it is fail to breed within this life span it will automatically extinct.

Why Dr Keith feels that this deadly insect won't come to Bangladesh. He gave three main reasons like- Bangladesh is too far from where the locust swarms are now; they don't travel against the wind direction and most importantly the habitat and topography. India’s wind direction is usually South to North-West but in Bangladesh it is South to north. Moreover, Bangladesh is too humid, too rainy and too green country which is not suitable or favourable for the desert locusts at all. Locust breeding is unlikely to occur because there are no deserts in Bangladesh. Finally, on set monsoon poured water its minimum probability to migrate in Bangladesh.

During open discussion session Dr. Keith Cressman clarified further why locust won't come to Bangladesh. Some participants were confused about char-land may act as desert but he cleared in Bangladesh there is no dessert but char-lands which are human habitants. Locust likes sandy dessert soil for its breeding cycle with high temperature (>35 degree Celsius) and low humidity which is less than 50%. The present average temperature of Bangladesh is below 35 degree Celsius and average humidity is more than 80%. Dry soil condition is another important criterion for locust breeding but the soil condition of Bangladesh is mostly clay to loamy and wet just now. This type of soil condition is not suitable for egg deposition of locust. Because, locust ovipositor can’t penetrates such type of soil.  Locust penetrates ovipositor 5-10 cm below the sandy soil and eggs goes up to 12-15 cm. But they never could penetrate the soil type we have across the country. Another positive emblem is that locust is the oldest insect pest in the globe and historically Bangladesh has never been attacked before by this noxious insect.

The problem of the desert locust mainly lies in the horn of Africa, especially in Kenya, Ethiopia and Somalia. FAO already sought a fund of 153 million dollars and they have already received 120 million dollars for the control operation to reduce the desert locusts and for relief and rehabilitation as well. They have also found the aerial operation is most effective and sprayed pesticides from helicopters in the affected zones of the affected countries. Besides, FAO has been closely working with the agricultural and other authorities concerned of the affected countries.

There is a high cost involved in controlling the invasion and FAO has been working wonderfully well in the affected countries. Bangladesh has no cause of being worried about entry of locusts into Bangladesh, but we must stay alert and keep communication with FAO as they play a vital role in monitoring and controlling the deadly insect with supreme expertise.

We should not spread and address any fake news or rumour regarding locust or any other alien insects or disease invasion. We should only rely on authentic source like FAO and Concern Authorities for forecasting any type of insect’s or disease outbreak possibilities. Our government is already facing lots of challenges; we shouldn’t destroy those efforts by spreading any fake news or rumour so that government to concentrate otherwise and/or employ labour and invest money for remedial measures. Let us amplify again no more locust panic in Bangladesh.