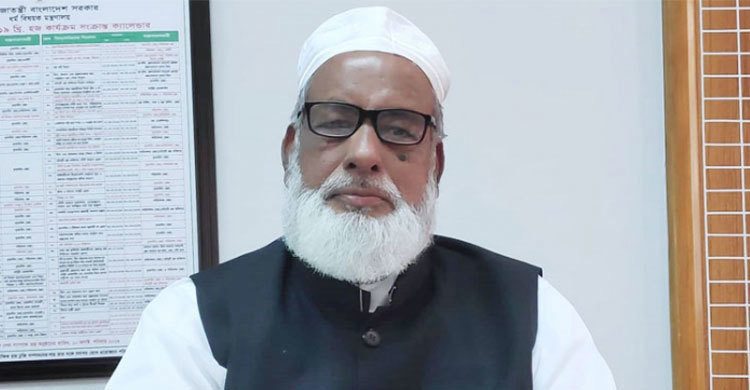 State minister for religious affairs Sheikh M Abdullah was laid to rest at his family graveyard in Gopalganj on Sunday.

Abdullah, religious affairs secretary of Awami League, was given a guard of honour before his burial.

Earlier, the body of the state minister was brought to Gopalganj. He was buried at his family graveyard at Kekania village in Gopalganj sadar upazila after a namaz-e-janaza on the premises of the mosque adjacent to his home.

Abdullah was buried at the family graveyard next to his parents’ graves, family sources said.

Abdullah was buried in line with the guideline for Covid-19 infected person as he was infected with coronavirus.

The state minister passed away on Saturday night at Combined Military Hospital (CMH) in the capital at age of 74.

President Abdul Hamid and Prime Minister Sheikh Hasina expressed deep shock at his death of state minister and prayed for eternal peace of the departed soul.

On Saunday, the 11th Jatiya Sangsad on the third day of its eighth session unanimously adopted obituary references on the death technocrat state minister.

Speaker Shirin Sharmin Chaudhury moved the obituary references with brief resumes on them.

Many lawmakers form treasury bench and the opposition have participated in the obituary motion discussion.

Later, a munajat was offered seeking eternal peace of the departed souls of the deceased.

Abdullah was born on September 8, 1945 in Kekania village on the bank of the Madhumati river in Gopalganj.

He is survived by two wives, 11 children and a host of relatives, well-wishers and friends to mourn his death.

Abdullah was the second among four brothers and three sisters.

Abdullah was appointed as the State Minister for Religious Affairs on January 7 in 2019.

He was first elected as the student union vice president of Khulna Azam Khan Commerce College.

After the assassination of Bangabandhu and most of his family members on August 15 in 1975, Abdullah played an important role to organize the district AL as the general secretary of the district chapter.

Abdullah operated electoral process efficiently on behalf of the party president Sheikh Hasina as her election agent every time. He had been a member of the board of governors of the Islamic Foundation for a long time and he was also a director of the state-run Agrani Bank during the period of 1996 to 2001.