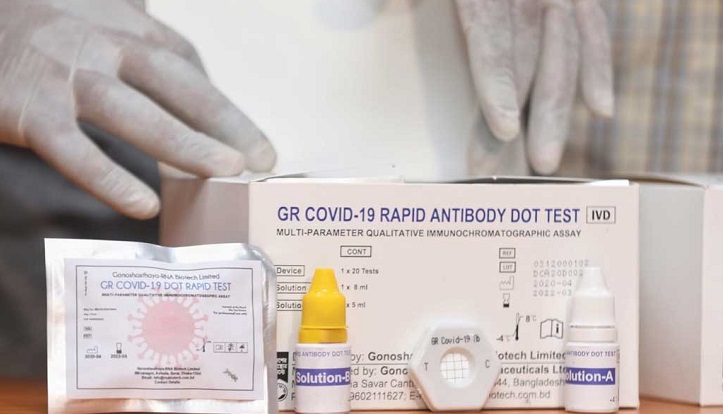 He said Prof Shahina Tabassum, head of the committee formed to conduct the performance study of the Covid-19 rapid testing kits developed by Gonoshasthaya, informed him that they will submit the report to the Directorate General of Drug Administration (DGDA) within a day or two.

He, however, said they are not going to make any report on the GK’s coronavirus-testing antigen kit as the organisation withdrew it on June 2.

Asked whether they will conduct the performance trial of antigen kit if the organistion resubmits samples with modification, the VC said they are unlikely to do that.

“They (GK) submitted the kit on May 20 and withdrew it on June 2. We won’t wait for an unlimited time.

According to GK, its antibody kit will help identify whether people have been infected with coronavirus in the past and the presence of antibodies or resistance power in their bodies. It will also help collect plasma of those who have recovered.

In a press release on June 2, GK requested the BSMMU authorities to suspend the performance study of its coronavirus-testing antigen kit due to the detection of some inconsistencies in sample collection procedure.

GK said it is upgrading the sample collection process.

On March 17, GK announced that they developed a testing kit that can examine samples to detect COVID-19 within 15 minutes, but the kit was still not approved by the authorities concerned.

Later, on April 30, the DGDA permitted Gonoshasthaya to get its kits tested. The DGDA informed Gonoshasthaya that the performance study of the kits could be done either at the BSMMU or IEDCR.

On May 2, the BSMMU authorities formed a six-member committee, headed by Virology Department’s former chairman Prof Shahina Tabassum, to conduct the performance study of the testing kits as the organisation approached the country’s premier medical university.