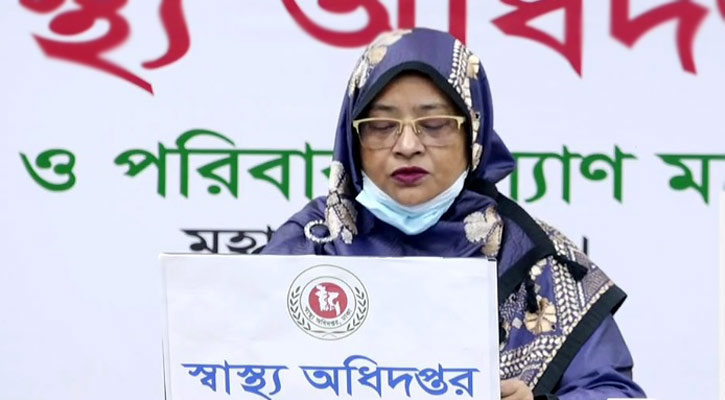 The health authorities in Bangladesh on Sunday confirmed the detection of 3,141 new coronavirus patients in the span of 24 hours, raising the total number to 87,520.

Besides, the death toll stands at 1,171 as 32 more people died from COVID-19 during the same period.

Additional Director General of the Directorate General of Health Services (DGHS) Prof Dr Nasima Sultana came up with the disclosure at its daily health bulletin.

In the last 24 hours, 60 coronavirus testing laboratories across the country tested 14,505 samples, she added.

“The detection rate of new patients on Sunday is 21.65 percent,” she said.

Across the country, 903 more patients recovered, she said adding that so far 18,730 people have recovered from the disease.

Against the total number of detected cases, the recovery rate is 21.4 percent and the mortality rate is 1.34 percent in the country.

“Twenty people died in hospitals across the country, 11 died at home and another was declared dead upon arriving at hospital,” she added.

Meanwhile, across the country, 712 more people were taken to isolation in the last 24 hours while 294 were released. Currently, 9,758 people are in isolation.

During the same period, another 2,792 people were home and institutionally quarantined and 1,763 were released. At present 61,814 people are quarantined across the country.

Dr Nasima urged everyone to wear masks. “Studies have shown that wearing masks reduce coronavirus infection and many countries have reduced the infection rate by ensuring that everyone wears masks,” she said.

The global death toll from Covid-19 reached 429,666 on Sunday morning while the confirmed cases were 7,764,977, according to the Centre for System Science and Engineering of the Johns Hopkins University.

According to JHU data, Brazil and Russia have come up to the second and third positions after the US with 850,514 and 519,458 confirmed coronavirus cases as of Sunday.

Meanwhile, South Asian country India has come up to the fourth position after Russia with 308,993 confirmed Covid-19 cases. The country has so far reported 8,884 deaths.

Coronavirus cases were first reported in China in December last year. The World Health Organisation (WHO) declared the coronavirus crisis a pandemic on March 11.