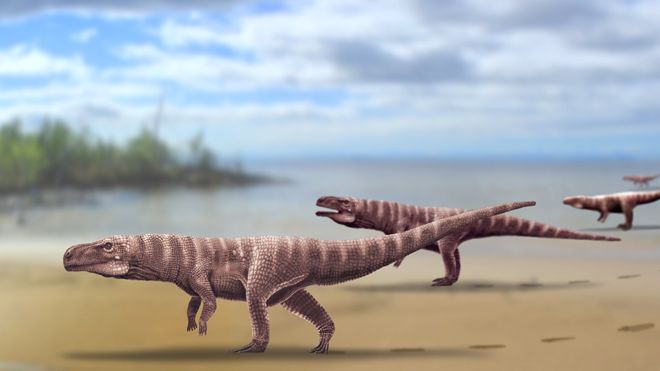 Scientists have been stunned to find that some ancient crocodiles might have moved around on two feet.

Nearly a hundred of these 18-24cm-long indentations were left in what were likely the muddy sediments that surrounded a lake in the Early Cretaceous, 110-120 million years ago.

The international team behind the discovery says it will probably challenge our perception of crocodiles.

"People tend to think of crocodiles as animals that don't do very much; that they just laze around all day on the banks of the Nile or next to rivers in Costa Rica. Nobody automatically thinks I wonder what this [creature] would be like if it was bipedal and could run like an ostrich or a T. rex," Martin Lockley, an emeritus professor at the University of Colorado, US, told BBC News.

The study is sure to provoke a lively debate. Not all researchers will necessarily accept the team's interpretation.
Prof Lockley and colleagues have assigned the name Batrachopus grandis to the animal that made the tracks, although no physical remains of it have yet been uncovered.

The acknowledgement of the creature's existence rests solely on the fossil prints themselves. These look very similar in shape, albeit much larger, to those made by Batrachopus crocs that lived tens of millions of years earlier in the Jurassic. Except those older beasts very evidently were quadrupeds - they did walk on all fours.

A bipedal interpretation for the new Korean trace fossils is the only explanation, claims Prof Lockley.

"We can see all the digits, all the ridges in the skin - just as if you were looking at your hands," he explained. "They put one foot in front of another; they could pass a sobriety test walking on a straight line. And there are no front footprints."

The depth of the impressions made by the heel also supports the idea of a more upright posture, said team-leader Prof Kyung Soo Kim from South Korea's Chinju National University of Education.

"Our trackways are very narrow-looking - more like a crocodile balancing on a tight-rope," he remarked.

"When combined with the lack of any tail-drag marks, it became clear that these creatures were moving bipedally.

"They were moving in the same way as many dinosaurs, but the footprints were not made by dinosaurs. Dinosaurs and their bird descendants walk on their toes.

"Crocodiles walk on the flat of their feet leaving clear heel impressions, like humans do."
For Prof Lockley, the new prints also help re-interpret a South Korean trackway he and other colleagues described eight years ago. In 2012, this group thought a set of less-well defined and slightly younger indentations might have been left by giant versions of the flying reptiles known as pterosaurs.

These animals are broadly recognised to have shuffled forwards when on the ground using their feet and hands - rather like a bat. This enigmatic trackway, however, had looked bipedal - perhaps the consequence of a pterosaur wading through water with just its feet in contact with the sediment.

Prof Phil Manning from the University of Manchester, UK, was not part of the discovery team. As a fossil trackway specialist himself, he described the prints as "very interesting" and welcomed their publication to begin a discussion - but he doubted the interpretation.

"For me, the tracks just don't fit the overall geometry of a crocodilian and what it's capable of producing," he told BBC News.

"Look at any videos of living crocs and the rotation of their feet when they're galloping: it's outwards, not inwards towards the midline of the trackway. Just from their orientation, it looks more like some kind of dinosaurian track-maker to me. But whether it's a croc - unfortunately, we just don't have the fossil bones to tell us."