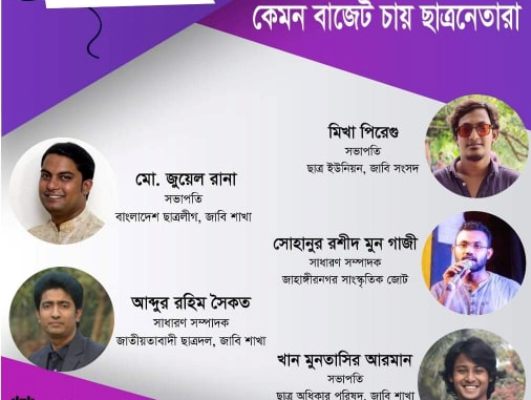 They made the demand at a virtual open discussion organized by Jahangirnagar University Journalists' Association (JUJA) on Thursday night conducted by General Secretary of the organization Md Mahbub Alam.

Addressing the meeting, JU BCL president Jewel Rana said, “Govt has allocated a large portion of financial support at Jahangirnagar University in the last national budget to improve the facilities of the university. But the authority has spent only 1.15 percent of allocation in research based project. We hope this year they will take initiative in favor of this section.”

General Secretary of JU branch Chhatra Dal Abdur Rahim Shaikat said, “About 80 percent of budget allocation of JU in the last national budget has spent to increase the facilities of teachers and officials. The welfare of the students has been disregarded and the authorities have increased the entry fees to minimize this deficiency. They should spend the current budget this year to increase the students' facilities.”

President of Bangladesh Chhatra Adhikar Parishad, JU unit Khan Muntashir Arman said, “The current corona outbreak has proven the lake of capabilities of our countries university. This is due to the eliminations of students based segment including the research facilities on budget allocation.”

President of Bangladesh Students Union of JU parliament Mikha Piregu said, “A university has to generate knowledge along with teaching and research. But JU is still backward in this regard.”

General Secretary of Jahangirnagar Cultural Alliance Shohanur Rashid Moon Gazi said, “Although having the largest science research center in south Asia, it is using only for photo session purpose at JU. The university authority has spoken up of expanding the library building with a mega project, but no initiative has ever been taken yet.”

Discussion on hall management and starting online classes has taken place on the very first day of the program while Pro-VC Professor Amir Hossen and president of hall provost committee Professor Bashir Ahmed has given the direction on behalf of the university authorities.

The next program will be launched with the participation of the university`s senate members and visible on the official Facebook page of the organization www.facebook.com/JUJA1972/.