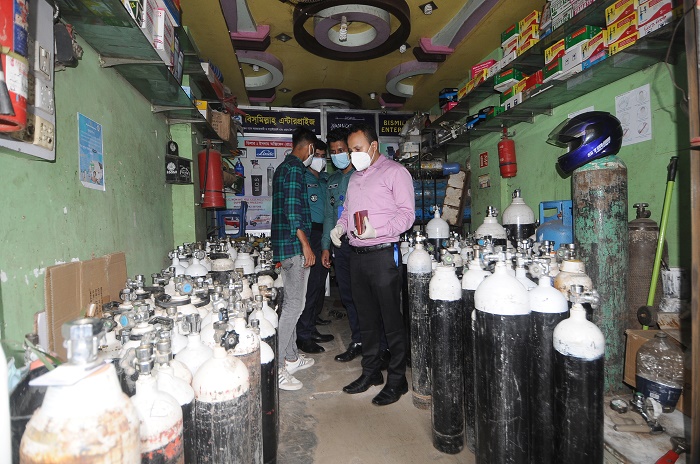 A mobile court of Chattogram district administration conducts a drive at a cylinder shop in Chawk Bazar area on Wednesday due to oxygen price hike at city market amid the coronavirus pandemic.- Sun Photo

CHATTOGRAM: A sudden rise in the demand for oxygen amid the rapid spread of deadly coronavirus has caused acute shortage of the life-saving medical item and pushed up its prices in the port city.

A section of oxygen cylinder traders have created an artificial crisis of the medical-grade item cashing in on the corona pandemic, sources concerned alleged.

Unscrupulous traders are realising Tk 16,000 to Tk 48,000 per oxygen cylinder which is almost double the actual rate, an official of Chattogram district administration said.

He also alleged that though supplying companies are charging Tk 122 for refilling an oxygen cylinder, retailers are realising more than Tk 1,000.

Moreover, despite having no dealer or distributor of the medical-grade oxygen in Chattogram, different companies are using fake documents for selling the item while many are supplying oxygen of industrial-grade in the name of medical grade, the sources alleged.

A total of 4,278 people have so far tested positive for coronavirus while 102 of them died and 294 recovered in Chattogram.

Among the total corona-infected people, 72 per cent have been reported from the city and 28 per cent from different upazilas in the district.

Many corona patients are also receiving treatment from their residences. Those who suffer respiratory problem need oxygen support.

As the number of corona patients is increasing fast, the demand for oxygen cylinders has marked a sharp rise.

Many panicked city dwellers have stocked oxyzen cylinders in their homes for use in emergency while charity organisations are collecting the item for donating to different hospitals.

The situation has prompted the Chattogram district administration to carry out mobile court drives to check the price spiral of oxygen and other related items.

During the mobile court drives several companies have been fined Tk 5 lakh for realising additional price for oxygen till Wednesday.

But different shops in the city’s Anderkilla and Sadarghat areas are charging over Tk 1,000 for refilling a oxyzen cylinder, he said.

An official of Linde Bangladesh said Hasan Traders, Brothers Engineering Works, Bismillah Enterprise and Jilani Oxygen Limited, which were fined during the mobile court drives, are not legal distributors or dealers of them, the magistrate said quoting him.

Quoting the official, the magistrate further said they have sufficient medical-grade oxygen and are also manufacturing more oxygen cylinders due to the  growing demand.

Some 4,000 more oxygen cylinders will be added to the supply chain from June 20, he added.

The district administration will also monitor whether the industrial-grade oxygen manufacturers are supplying the item properly, the magistrate said.