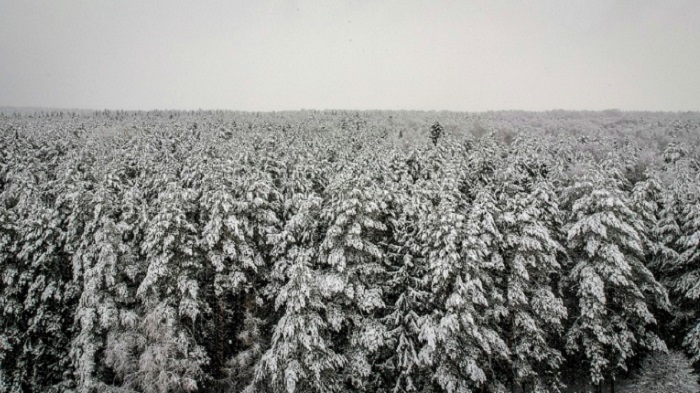 Best known as a vast, cold tundra, Russia's sprawling Siberia region is being transformed by climate change that has brought with it warmer temperatures, forest fires and growing swarms of hungry moth larvae.

Spanning millions of square kilometres east of the Urals to the Pacific Ocean, the area has been particularly hard hit this year by extreme weather, which scientists say is the result of global warming.

Photographs of wild flower fields in local media last month were a rare site so early in the year in the normally chilly region -- and ice cream sales were up 30 percent.

"This winter was the hottest in Siberia since records began 130 years ago," said Marina Makarova, the chief meteorologist at Russia's Rosgidromet weather service.

"Average temperatures were up to six degrees centigrade higher than the seasonal norms."

Then spring came and with it much warmer temperatures. Makarova says April saw some days reach 30 C or higher.

Rainfall was up by a third in eastern Siberia, sparking devastating floods that forced thousands to be evacuated, particularly in the town of Tulun and the surrounding area.

Swarms of the Siberian silk moth, whose larvae eat away at conifer trees in the region's forests, have grown rapidly amid the rising temperatures.

The moths are usually inactive during winter and eat in spring, summer and autumn periods which are now lengthening.

"In all my long career as a specialist, I've never seen moths so huge and growing so quickly," said Vladimir Soldatov, a moth expert, who warns of "tragic consequences" for forests.

The larvae, which are taking over larger areas of forest, strip trees of their needles and make them more susceptible to forest fires.

The moth "has moved 150 kilometres north compared to its usual territory and that's because of global warming," Soldatov told AFP.

In the Krasnoyarsk region of eastern Siberia, more than 120,000 trees have had to be treated to kill the larvae, according to the regional forest protection centre.

Another insect pest, the bark beetle that bores into tree trunks, has also recently colonised the region. It has flourished since 2003 as the climate became milder.

With the snow melting earlier in the year in northern Siberia, exposed dry vegetation and soil means fires can spread easily, said Alexei Yaroshenko, who heads the forest section at Greenpeace Russia.

Climate change has led the number of forest fires to "double in 10 years," said Vyacheslav Kharuk, the head of the forest monitoring laboratory at the Forest Institute in the city of Krasnoyarsk.

The fires risk cutting the capacity of far-northern boreal forests to retain carbon dioxide and methane, which will lead to higher emissions of greenhouse gases that contribute to climate change.

According to research by Kharuk's laboratory, between 2000 and 2009, around three million hectares of forest caught fire every year. Between 2010 and 2019, the average was six million hectares.

In years to come "the area of the fires will increase to double or four times the size," he predicted.

The news is not all bad: the changing nature of Siberia's landscape will attract new species of birds and animals, Kharuk added.

"Our steppes are getting greener. Our lakes are warming up. Siberia is becoming a more appealing region for animals and for us, too."

But, he says, the number of extreme weather events means he is already starting to "miss our winters with temperatures of minus 40 degrees centigrade".