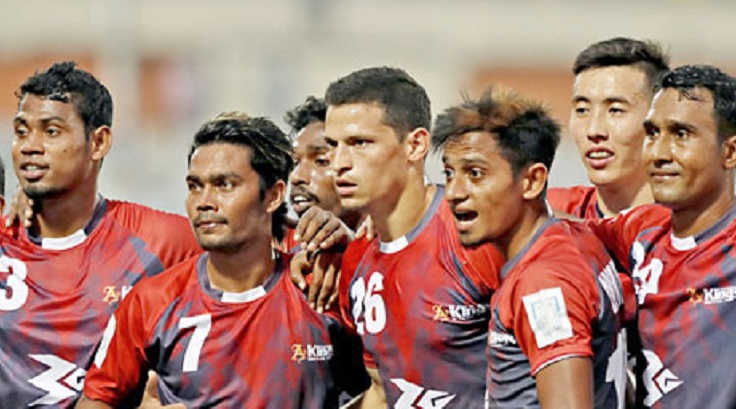 Bangladesh Premier League champions Bashundhara Kings and its Group E rivals are set to play their remaining matches of the 2020 AFC Cup at a single venue in October.

Asian Football Confederation took the decision during an online meeting with the respective football federations and their club representatives on Friday.

Bashundhara Kings have been placed in Group E (South Zone) along with Chennai City Football Club of India and two Maldivian clubs TC Sports Club, Maziya Sports and Recreation Club. Teams played one match each on first match day on March 11 two days after AFC froze its ongoing season for indefinite period in the wake of the pandemic worldwide. Rest of the matches of Bashundhara were also halted.

Kings, which is playing in AFC Cup for the first time, joined the day’s meeting with their proposal of new registration window before resuming the competition. After the meeting, Bashundhara Kings President Imrul Hassan said, “Meeting was successful. I think ‘Centralised Format’ is a good proposal because the group matches will be completed within 13 days from Oct 23 to Nov 4 at the neutral venue. There will be no visa or travel issues and medical restrictions. We will also get one month to reform the team under this centralised format, one more month for pre-season. So, we will go with it.”

“One of our proposals was opening a new registration window. Considering the booters’ contract expiration, they allowed a new registration window on August or September. Now, we will able to register new booters or to extend short-term contracts with our booters to set up a new team. AFC hasn’t fixed the neutral venue yet. But we proposed to AFC to choose the venue outside of three participating countries. Because we are not in the condition of arranging any tournaments while India, Maldives have some visa restrictions. So, it will be better to choose a neutral country,” he further added.

However, AFC hasn’t taken any decision yet. They will issue the final guidelines and regulations about the format, schedule, venue, dates and new window at the end of the June, after getting approval from AFC Competitions Committee for their approval.

The 12 matches of this group were originally scheduled to be completed by June 17 but only two matches could be held on March 11 before AFC had to postpone the competition due to coronavirus pandemic on March 18.

Earlier on March 11, Kings thrashed TC Sports Club 5-1 in their maiden appearance in the Asian club competition in Dhaka while the other match between Maziya Sports & Recreation and Chennai City FC ended in a 2-2 draw at the Jawaharlal Nehru Stadium in Chennai.

BFF General Secretary Md Abu Nayeem Shohag said, “All the participating sides anonymously agreed to play under the centralized format. We can’t hold any tournaments while other two countries India and Maldives have some visa restrictions, so Bashundhara Kings proposed for a neutral venue. AFC haven’t confirmed anything yet. Hopefully they will confirm it within three weeks.”