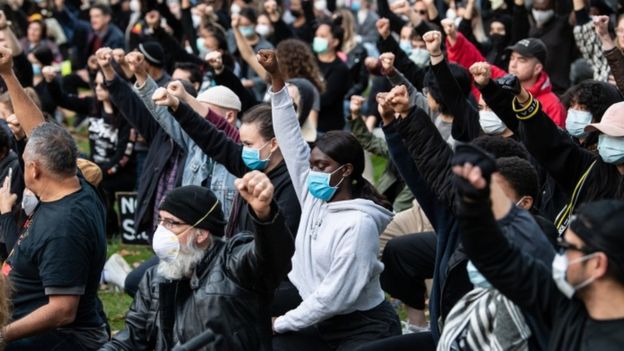 Tens of thousands of people have protested across Australia in support of the Black Lives Matter movement.

Rallies were held despite warnings from officials over the coronavirus.

A ban in Sydney was lifted only at the last minute and some organisers have been fined for breaking health rules.

The marches were inspired by the death of African American George Floyd in police custody but also highlighted the mistreatment and marginalisation of Australia's Aboriginal people.

Rallies were organised in Brisbane, Melbourne, Hobart, Adelaide and elsewhere.

They were held in high spirits with no reports of major unrest.

There were a few tense scenes later in the evening at Sydney's Central Station, with police using pepper spray, but there were only three arrests in the city overall, among a total of 20,000 protesters, police said.

Although the rallies were sparked by the death of George Floyd in Minneapolis, many in Australia were also protesting against the treatment of its indigenous population by police.

Banners reading "I can't breathe" remembered the words of Floyd before his death, while another said: "Same story, different soil."

The Sydney protest had been ruled unlawful on Friday by the New South Wales Supreme Court under coronavirus social distancing rules.

NSW Police Minister David Elliott had said: "Freedom of speech isn't as free as we would like it to be at the moment. Rules at the moment are clear."

But organisers took the case to the state court of appeal and it overturned the ban on Saturday afternoon, just 15 minutes before the scheduled start.

The protest was authorised for 5,000 people. Health ministry directions would normally prohibit public gatherings of more than 10 people.