Discarded tyres a source of dengue 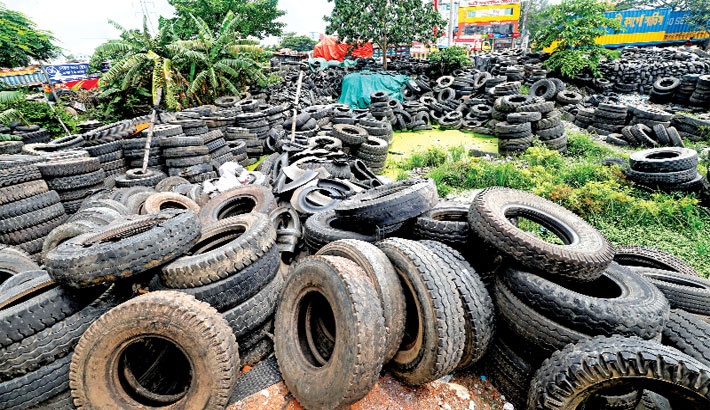 Piles of discarded tyres pave the way for breeding of dengue and other mosquitoes in the capital and its adjoining areas in the rainy season.

Storing of such vehicle tryres has been a dengue-breeding ground as many traders store lakhs of pieces of such tyres.

While visiting different parts of the capital and its nearby Siddhirganj and Kanchpur areas on Thursday, it was found that a huge number of old and expired tyres were lying indiscriminately with accumulated water.

Besides, most of the drains, water body, canal and even construction sites in Dhaka have turned into a common breeding ground for mosquitoes.

A survey by the Directorate General of Health Services (DGHS) found that under-construction buildings are increasingly becoming nesting sites for mosquitoes.

Although the threat of the mosquito menace was relatively low during the dry winter season, it can resurface in the monsoon, warned experts.

They have suggested taking necessary precautionary measures beforehand to thwart another dengue crisis.

As part of a programme to curb malaria and Aedes mosquito-borne diseases, the DGHS launched a drive in December last year to identify the breeding grounds for mosquitos within the areas of the two city corporations.

The survey was conducted in 100 neighbourhoods in 98 wards under the two city corporations and took into account a thousand households and structures in Dhaka.

The report showed that 36 percent of residences in Dhaka South and 32 percent in Dhaka South had a ‘house index’ rating of 10. Construction work was ongoing in more than 40 percent these houses.

“The authorities found water-filled barrels and high number of mosquitoes in these places. There won’t be any Aedes larvae if we remove the stagnant water. We can’t address this issue if we only focus on larvicide rather than eliminating the breeding grounds.”

“The dengue-carrying Aedes mosquitoes breed in these construction sites.

Therefore, construction companies should come forward and take responsibility to contain the menace.”

“The drive will continue for 10 days each month till at least August,” Atiqul Islam said at the corporation meeting on Wednesday.

“If environment conducive to the breeding of Aedes mosquitoes is found anywhere; even if it is a government institution, the owner will be punished by fine or imprisonment or both according to the law,” he said.

He assured that the city’s drains, canals have been cleaned and dug to prevent waterlogging during monsoon.

“The Kalshi canal has already been dug while excavation of AD-6 canal of civil aviation authority has been started in Ashkona area.”

He urged the councillors to talk directly with the city dwellers in their respective areas through Facebook Live once a month regarding their complaints and needs.