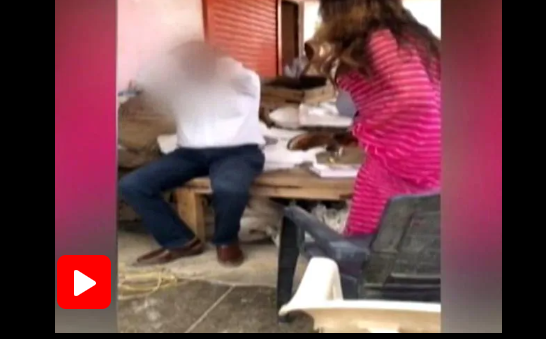 On camera, TikTok star-turned- Indian BJP leader Sonali Phogat slaps an official in Haryana and thrashes him repeatedly with slippers, allegedly over a comment he made. A video of the assault is viral on social media.
The incident took place on Friday when Sonali Phogat, who unsuccessfully contested the 2019 Haryana assembly election as a BJP candidate, was inspecting a farmers' market. She went with a list of farmers' complaints to Sultan Singh, a member of the Agricultural Produce Market Committee, who allegedly made an objectionable comment.

A furious Ms Phogat then started thrashing and abusing the officer.

As she rains blows on the official with a slipper, he is seen pleading with her, saying he was noting her complaints and would address them.

Ms Phogat later called the police. According to reports, she didn't press charges after the officer apologised.

"She said look at me and talk. Do you know me, she asked. I said I know you fought the polls from Adampur. I have noted everything and will get things done, I told her. Then she asked me, why did you oppose me in the elections? I have no family in Adhampur, I told her. I said, how will I vote in your constituency and you are blaming me so long after the elections. She then started saying, "You are abusing me." I kept saying I didn't abuse. Suddenly, I was getting slapped from all sides," the official told reporters.

"Khattar government's nauseating deeds! Adampur, Hisar's BJP leader is beating market committee secretary like an animal. Is being a government worker a crime? Will Khattar sahab take action? Will media remain silent?" he tweeted in Hindi.

Mr Phogat, a popular entertainer on TikTok, lost the Haryana election to Congress's Kuldeep Bishnoi. While campaigning, she provoked a controversy with her comment at a rally that those who can't say "Bharat Mata ki Jai" were of "no value".

"Are you all from Pakistan? If you are Indian then say Bharat Mata ki Jai," she was heard saying in a video. When her call didn't inspire an enthusiastic response, she said: "I am ashamed of you all... that there are Indians like you... Those who can't say Jai for their nation, for the sake of petty politics... Those who can't say 'Bharat Mata Ki jai', their votes are of no value."

She also made headlines last year when she filed a police complaint against her sister and brother-in-law alleging that she was assaulted and threatened.