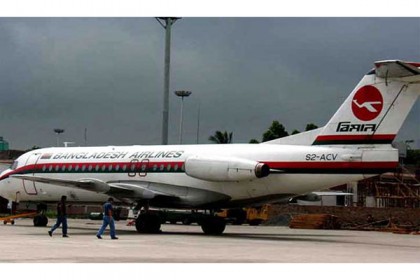 Biman Bangladesh Airlines is offering chartered flights on domestic routes for family trips at a cost of Tk 3 lakh to Tk 5 lakh depending on the distance, according to media report.

Officials of the state-owned airlines came up with the information on Thursday.

According to the airlines, the offer is being given for family trips. Some Tk 3 lakh to Tk 5 lakh will have to be spent as fare but it will depend on the distance. The chartered flight can be managed for 5 hours. Extra fare may be charged for extra hours. Some other conditions will be applicable.

Anyone will be able to manage Biman’s flight for the trip from Dhaka to any of the seven airports of the country including Saidpur, Chattagram, Sylhet, Jashore, Rajshahi, Cox's Bazar and Barishal.

Mentionable, media report revealed that the airlines authorities have taken such initiative in order to minimise losses caused by frequent cancellation of scheduled passenger flights due to low passenger count for some days.