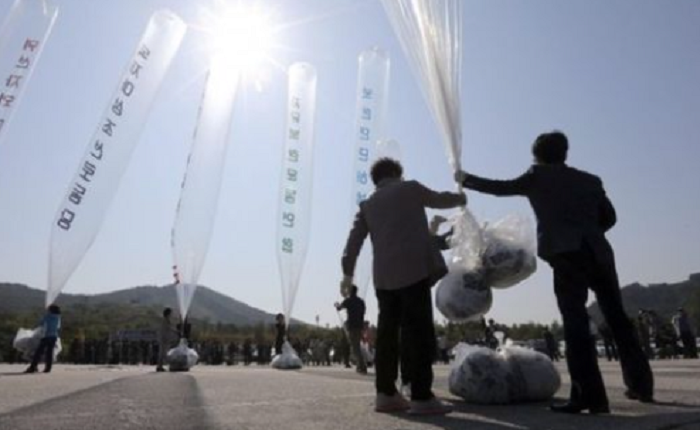 For years, activists and defectors have sent messages criticising the North and its leadership across the border.

But the South Korean government said the balloons caused "tension".

One group told the BBC they had no plans to stop - and had another one million leaflets on order.

In the past, the balloons have also carried dollar notes, and even chocolate.

In 2014 North Korean soldiers attempted to shoot them down - leading to an exchange of fire across the border.

The North has also sent its own leaflets on helium balloons across the border in the past, demanding - among other things - an end to "further hostilities or stupid actions".


What did Kim Yo-jong say about the balloons?
Kim Yo-jong - who holds a powerful position in the North Korean government - issued a long statement on Thursday, blaming "defectors from the North" for recent leaflets.

"I wonder if the world knows what kind of riff-raff those foolish defectors are," said the statement, translated by KCNA Watch.

"Human scum - little short of wild animals who betrayed their own homeland - are engrossed in such unbecoming acts... they are sure to be called mongrel dogs as they bark in where they should not."

Ms Kim then said the "owners of the mongrel dogs" - that is, the South Korean government - should be held to account.

She threatened to scrap a no-hostility military pact, shut down the North-South liaison office, and withdraw from the joint-venture Kaesong Industrial Park.